Yesterday was Crunch’s 13th birthday. We did not celebrate yesterday because we were insanely busy and quite honestly it slipped my mind (I don’t know why, it’s not like I have four children with two of them playing soccer. Oh wait I do, never mind.)

So today it is all about Crunch. This is what he looked like when we first got him: 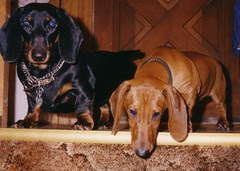 puppycrunch+rally
Originally uploaded by Teckelcar.
He was a cute little puppy, and for a brief while, Rally was much bigger. Initially Rally thought it was a bad idea that we got this interloper, but now they are generally happy to be together:

Crunch&Rally
Originally uploaded by Teckelcar.
This is my favorite picture of Crunch when he was in his prime, he was about 3 ½ years old: 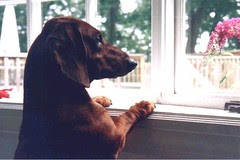 Looking for love
Originally uploaded by Teckelcar.
He is watching butterflies flitting about on the butterfly bush right outside the window. This picture has been used in a both a local club and in the National Dachshund Club’s newsletters.

Crunch has grayed quite a bit since then. But he is still an amazingly fit dog.

crunchside
Originally uploaded by Teckelcar.
I took this picture about two years ago. His face is all white along with his paws. Only recently has he started to slow down. He is affectionately known as “The Wildman” at the kennel I board our dogs at when we go out of town. Just last year one of the kennel workers noted that now he has calmed down to the activity level of a normal dog.

Tonight we will celebrate with a hamburger cake for the dogs and a real cake for the rest of us. Happy Birthday Mr. Crunch.
Posted by Sarah at 12:56 PM