This weekend is a race weekend at RIR. As a result for the past week and a half everywhere you go in the metro area you see NASCAR show cars. Last Friday we bumped into Kyle Busch’s car during our daily pilgrimage to Lowe’s 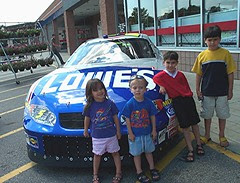 racecar
Originally uploaded by Teckelcar.
With all of the other cars we have seen to date it has been a strictly hands off affair. This time, however, we were free to drape ourselves over the hood and lean inside to get a good look. We also scored some stickers and small posters of Kyle Busch and Jimmie Johnson.

And why have we been going to Lowe’s on a daily basis? Why to buy stuff to make the shed. We needed to use concrete piers to level out the base for the shed.

shed2
Originally uploaded by Teckelcar.
You can actually see the piers from this angle. They weigh a ton and I only bought a few at a time, hence the daily pilgrimage. You can also see that we have attached the flooring to the frame we made last weekend, but I digress.

Today while out and about with Max and Rebecca we found Elliot Sadler’s car. He is the kids’ favorite driver. They may be influenced by the fact that he drives the M&M car. Anyhoo, we got to see the car and got an amusing poster featuring the car and the M&M spokescandies, red and yellow. They also had a trailer with a bunch of race simulators. I had fun controlling the gas and brakes while Max and Rebecca steered. This resulted in a fair amount of slamming into the walls and running across the infield. Suggestions on how to steer were not welcomed. Then we were told that if we bought four of the promoted Kellogg/Cheez-its products we would get a radio controlled racecar. Well, you can never have too many Cheez-its in the house and they did give us some coupons, so we ended up with a nifty remote control car too. All in all it was a good day.

*For y'all not up on your Nascar trivia.