Down on the Farm Museum

Last Thursday I took the kids to Crump Park / Meadow Farm Museum. It is a large park with rolling fields, ponds, an awesome playground and a 19th-century living history farm museum. The museum part consists of a farmhouse, barn, smokehouse, forge, stable, 1860’s Dr.’s office (we skipped that part), crop demonstration fields and farm animals. I had gone there the previous week with just Jake, Max and Rebecca while Nate was at composition camp. Nate was very envious of his siblings when they told him about the part so I promised to take the following week. It is a long drive from our house, but I could combine it with a few errands.

When we arrived we discovered that the sheep were loose on the grounds. You can see a portion of the flock grazing just behind the kids.

The sheep were fairly skittish and would not let us get close to them. Nate was intrigued by the sheep and kept darting after them. At one point the flock took shelter under the farmhouse’s porch. They didn’t stay underneath very long; Nate flushed them out when he went to look at their hiding place. 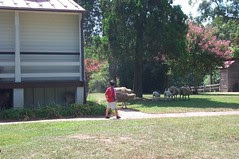 To give the sheep a break I herded my flock to the pigsty. When we looked into the pigsty one pig was fast asleep in their shelter and the other pig was sitting in a rather mucky puddle. When the puddle pig saw us it got up and waddled over to the fence and proceeded to rub his back on the fence post. Obviously it wanted us to scratch its back and the kids were happy to comply. 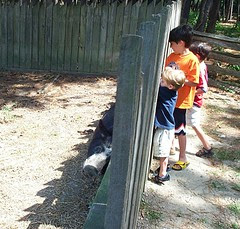 pig
Originally uploaded by Teckelcar.
The pigpen is located next to a vegetable garden, a very practical idea. If you have any rotten veggies you can just toss them over the fence to the pigs.

Next we went to see the horses. 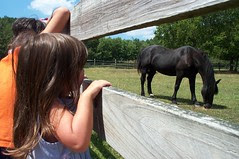 horse
Originally uploaded by Teckelcar.
Jake, Max and Rebecca were a little confused when we saw the horses. The previous week there had been cattle in that particular pasture and the horses were elsewhere. On Thursday we never did find the cattle. But we still had fun admiring the horses.

We then visited with the chickens and stopped at the educational center /gift shop to get some old fashioned candy sticks. A little steep at fifteen cents a stick, but it’s a nice way to end our visit at the museum. We then went over to the playground to wrap up our trip.

The playground is quite large and has equipment appropriate for different ages. The part I like the most is the human powered tram. As one person turns the pipe the tram glides along its track with its passenger(s).

Jake and Nate took turns sending their siblings back and forth along the 15-20 foot track. It is well designed; one child can easily move three children on the tram. After forty-five minutes of running, jumping and climbing about we were all ready to go home.