Of Koalas and Raccoons

For the first two weeks of school Rebecca has been wearing her raccoon suit to the bus stop when we pick up Jake and Nate.

The first few days it was her idea to put it on and ride in the wagon to the bus stop. I didn’t realize how popular this was until Jake and Nate commented how everybody on the bus loved seeing her in the costume. One day she wore it in the morning, but not in the afternoon. The bus driver expressed mock disappointment when she saw us that afternoon. “What? No raccoon?” I then replied something to the affect that she had already worn it that morning.

Last Thursday Max wanted to get in on the fun and wore his koala costume. 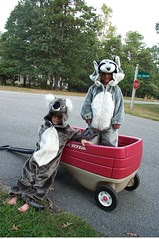 In this picture they look calm and poised. Twenty minutes later it was a different story. They were rolling around on the grass, giggling madly and wrestling with each other. Too bad that those pictures did not turn out.

They look so cute in their costumes. The costumes themselves are hand me downs from Jake and Nate. I think I have gotten my money’s worth.
Posted by Sarah at 11:53 PM