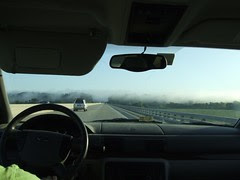 Foggy river
Originally uploaded by Teckelcar
As I had mentioned earlier, on Saturday we had a couple of sporting events. Jake had a soccer game and Nate had a football game. Jake's game was at 9:00 am and just under an hour's drive away, meanwhile Nate had a 10:00 am game at the field 15 minutes from our house.

Larry had volunteered to be part of the chain gang so he was in charge of Nate. Which left me with Jake and the dynamic duo.

It was Jake's first game of the season and the coach requested that the players show up about 8:30 am. Which meant we needed to leave the house no later than 7:30 am, earlier would be even better because of my planned McD's pancake run to appease the younger set. 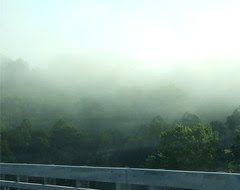 misty morning
Originally uploaded by Teckelcar
Miracle of miracles w actually left the house before 7:30 am. I guess having a week of school helped prime them for another early morning. Who knows, I'm just glad it all worked out.

It was a bit cool out and the ride was beautiful. As we approached a river we could see a low bank of fog laying over the water. Mist wreathed the trees on the riverbank and swirled across the bridge. It was a struck by the view and desperatly wanted to capture, but alas I was driving.

Fortunately I had Jake with me and he sensed my need to at least try and photograph our ethereal surroundings. Without any prompting he offered to take a few pictures. I fished my camera off of the front passenger seat and passed it on back to him. He was able to take quite a few very nice shots before we crossed the bridge. 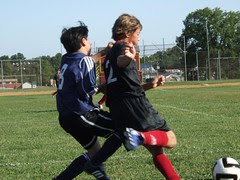 Jake in Action
Originally uploaded by Teckelcar
The rest of the ride had a few more dips into low lying fog, but none as dramatic as he first time on the highway. We wound our way through farmland and onwards. We got to the playing field a few minutes before 8:30, just beating the coach by five minutes.

Our team's players showed up in dribs and drabs, with the last two players to fill out a field of 11 showing up just before game time. One more boy showed up a few minutes later and gave our team a much need substitute. We have a roster of 16 or so, but quite a few didn't make it.

In the end it all worked out. Our team was a bit ragged at first, but over the course of the game they started to come together as a team. It was fun to watch them improve and even though they lost it was a very good game. The other team was challenging and gracious. Both teams agreed it was a very satisfying game to play.
Posted by Sarah at 11:22 PM