Artist of the Week: Editorial Comic 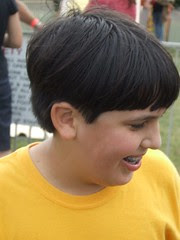 Jacob
Originally uploaded by Teckelcar
This week's artist is Jake. Larry was the one that caught this great picture of him at the Amelia County Fair. All I had to do was rotate it and it's good to go, I didn't even have to any cropping. I complimented Larry on the good job of capturing our son's smile and he said you really do have to take pictures when people are unaware. It makes all the difference.

Indeed it does, though we do sometimes get some funny mugging.

Anyway a couple of summers ago Jake to a cartooning class up in Richmond. He learned a few of the ins and outs of cartooning and to this day still likes to make the occasional strip. And thus brings us to this week's art.

A few weeks ago Jake had an assignment in class regarding an article he found in the newspaper. I don't know if he was told to do a strip, that is what he did.

comic
Originally uploaded by Teckelcar
The article in question was about four swine flu case presumed at VCU and a bit of a run down about the H1N1 virus. Irionically Jake has just spent the last three days home with the flu, but will be back in class tomorrow.

Unfortunately the comic did not scan at all well, so I'll quote the panels for you from left to right, top to bottom.

1.) Today on VCU news, we will look at the topic of swine flu. There are four reported possible cases of it.
2.) Three of the students went home...
3.) While one stayed at his dormitory.
4.) Now we go to where they supposedly got the swine flu.
5.) Ahh!! Invasion of the pigs!

I just love that pig with the laser bean eyes in the final panel. It just cracks me up. I need to get Jake to finish coloring this in.
Posted by Sarah at 11:54 PM