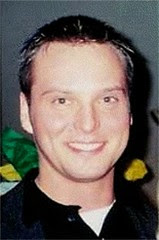 Marty, as he was known by friends and family, was only 29 when his life came to an abrupt end on September 11th, 2001.

He was 6 foot 2, 180 pounds, with hazel eyes. From what have learned about him he played baseball in college at St. Peters in New Jersey, to the extent that it took him seven years to work through and finish with a degree in financial management. After college he gave himself four years to get out of the minors and into the big show. In that time he played for Class A and AA teams of the Pittsburgh Pirates and the Detroit Tigers. When the four years were up he ultimately ended up at Cantor Fitzgerald.

Sadly, he wasn't even supposed to be in the North Tower that fateful day. He was to head the new office on the Jersey Shore. Originally it was slated to open in July, then Labor Day, only to delayed yet again.

When asked about his future goals, we stated that he wanted to retire at 35 and become a fly fishing guide in Montana. Ideally he would work for seven months, then ski the remaining five. If was still alive today he would have been two years into his retirement. 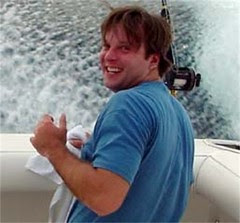 Martin Boryczewski fishing
Originally uploaded by Teckelcar
His friends and family have set up a scholarship foundation in his honor. From the foundation's website:

The Friends and Family of Martin Boryczewski Scholarship is awarded to a member of the junior class at Morris Catholic High School. Established in memory of Martin Boryczewski, a 1990 graduate of Morris Catholic, this scholarship is awarded to a student who has actively and consistently demonstrated the true Crusader Spirit of “character, community and commitment.”

This is a two-year scholarship that provides for $3,000 of the recipient's tuition for junior and senior years.

The scholarship will be awarded to a junior student as selected by the Morris Catholic administration and based upon the following criteria:

To support their endeavors an annual golf outing held, this year it is on Sept. 19th at the Black Bear Golf Club in Franklin, NJ. Last year was wildly successful and they were able to make the $3000 yearly commitment to the school.

Here's hoping that Marty's name and the good works done in his honor live on.