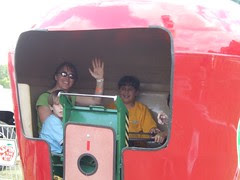 berry go round
Originally uploaded by Teckelcar
Saturday we were all over the map, literally.

In the morning Jake had a soccer game three counties over, necessitating our getting up at the crack o' dawn. I had to take him and two seven years old at 7:30 in the freaking morning. To promote a more positive attitude and willing participation among the younger set I bribed them with McDonald's pancakes at the beginning of our nearly hour long drive. We got there on time and Jake had a good game. Then it was back home to met up with Larry and Nate once Nate's football game was over.

Then it was time for the serious fun to begin. 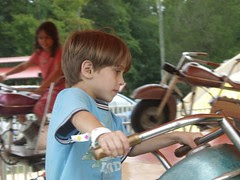 Max
Originally uploaded by Teckelcar
We missed out on our county fair last week. We were tired after seeing the Velvet Marias and our county's fair is not at it's best on its last day. We did, however, notice that Amelia county was having its fair Sept. 9th on through the 13th. This would work and as an added bonus there would be a demolition derby in the evening. I was totally sold on the idea.

After lunch and bit of noodling about the house we loaded up the van and headed on out to Amelia. Our plan was to meet Meryl in Amelia and take it from there. 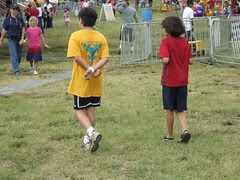 what to do next
Originally uploaded by Teckelcar
There was a bit of grumbling at first, the kids wanted to just hang out at home, but we dragged them along anyway. We had pre-purchased wristbands for the rides and by gum we were gonna use them.

I am so glad we went. It was a smaller and much friendlier event than our own county's fair. I'm not knocking ours, but it's nice being able to let the boys wander about and not worry about where they are. It was far less crowded and the venue was easily a third of the size. You could easily survey the whole thing from the ferris wheel. The rides were pretty much the same and the kids had a good time. 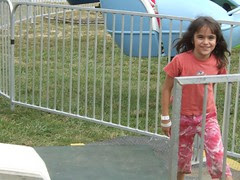 having fun
Originally uploaded by Teckelcar
The only thing we missed out on was the carousel. There was one available, but Rebecca had no interest in it until after we had dinner. By then it was too late, Our wristbands expired at 5:00 pm and it was well past that. I'm a little bit saddened that I don't have our annual picture of Rebecca on the carousel, but I'm not going to force her. As the expiration hour of the bands drew near I explained to her several times that if she wanted to go on any more rides, now was the time to do it. I wasn't going to buy additional tickets once the wristband time period was over. She was a bit disappointed, but she didrealize it was her own fault. I had mentioned it to her on several occasions. 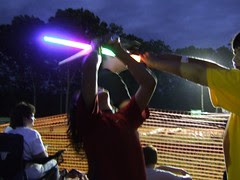 lightsaber duel2
Originally uploaded by Teckelcar
And anyway we had a demolition derby to attend.

I'm not going to write much here about it. Suffice it to say we had a great time. It was just as good, if not better, than I expected. It'll be a subject for my next post.

I'll just leave you with the image of my two oldest battling it out with their midway light sabers. They provided some good entertainment between heats at the derby.
Posted by Sarah at 11:41 PM