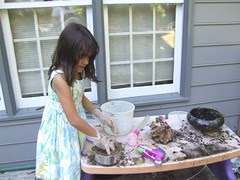 mud pies
Originally uploaded by Teckelcar
Rebecca decided that today was a good day to make mud pies. Of course being a feral princess she had to wear a pretty dress and latex gloves. Apparently she does not like getting dirt under her finger nails.

She was using left over potting soil from the center pieces from Jake Bar Mitzvah. She added water and then formed the pies on her little plastic plates from her tea set. She then told me that once they are dried she will feed them to John.

Which was news to me.

She then went on to say that she tried giving the mud pies to Dell, but he would only give a quick sniff and walk away. Dell likes tea parties, but he is not a fan of the mud pie. Only John likes mud pies.
Posted by Sarah at 6:26 PM