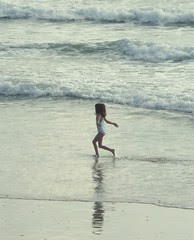 Rebecca is a free spirit. She likes to do things on her own terms and at her own pace. Heaven help anyone that asks her a question before she is ready, especially in the morning. She is not a pleasant person when she first wakes up and before she has eaten. She has firm opinions and does not hesitate to share them.

This morning she was irritated that she would be having Chinese class today. She hates Chinese, according to her it's boring, stupid and pointless. As she was getting worked up Max watched her in amazement. He too has Chinese class and he doesn't care for it, but not to the same extent as his twin.

I let her run down without comment. A teeny, tiny part of me knew I should be championing the class, it's good to be exposed to foreign languages and it is the most widely spoken language. But... I agree with her.

Last year the school district decided that the elementary school would have foreign language instruction for one hour once a week. The individual schools could choose the language- French, German, Spanish and Chinese. Most schools opted for Spanish or French, a few choose German and our school was the only one to pick Chinese. A language I might point out that is not supported in the middle school.

So here I am with a very unhappy child that is justifiably irked and I just can't muster the enthusiasm I should for the class. I too think it's a waste of time and resources. One hour a week is not enough to learn a language. And why oh why couldn't it be a useful language like Spanish? There is a large Spanish speaking population in the area and there are frequently new kids in the school that start school knowing little to no English. This could be the one class they could really shine in.

So yeah, it's hard to be the mommy when you agree with your kid.

(Oh and about the picture I like the version I posted, but I think the uncropped version is even better- but then Rebecca becomes too small in the picture to use in a post. If you want to see that picture click here.)
Posted by Sarah at 3:37 PM