Last week was the try-outs for the travel soccer teams. Jake has been playing in the recreational soccer league for quite some time. Last December he tried out and made the team. It was a “fill-in” tryout to replace players that had left the team. So many kids with enough skills and talent showed up that it was decided that another team would be formed. Jake was on the new team. Unfortunately the team was dissolved due to lack of player commitment and Jake was devastated. He was so excited to be on the team and then watched it all melt away.

This try-out session was for all the players. Exisiting travel team members had to try-out along with everybody else. The under 10 (U-10) division was scheduled for Tuesday and Thursday. Tuesday it was very hot and muggy. You could see the kids were dragging a bit. After one particular drill Jake got discouraged and Larry could see it in his performance (I had already bailed out to hustle Nate home for his piano lesson). That night Jake suffered terribly from heat exhaustion. I ended up keeping him home from school the next day.

On Thursday Jake wasn’t interested in going to the tryouts. I banished his siblings and pulled him aside. I told him it was his decision to go or not to go. Either way he would still be going to the field as it was his normal soccer practice day. I then said he should really think about this and that I didn’t want him to regret not going the next day. He puzzled it over a bit and decided since he was going to be there he might as well go to the try-out. I then loaded everybody into the van and drove to the field.

When we got there the weather started out the same as Tuesday, but the wind picked up and suddenly it was almost reasonable. I then settled down and watched Jake and all the other hopefuls. It seemed to be slightly less kids and from chatting with the other moms I found out that a lot of the other kids had suffered from Tuesday’s heat as well.

Thursday’s activities were more to Jake’s liking. He doesn’t have much patience for endless drills. He likes to mix it up in scrimmages. Jake may be on the small side, but he is not intimidated by larger players. At the end the parents were called up and the head coach gave a little speech about the kids and when we would be notified about the team placements. We left for home cautiously optimistic.

On Friday Jake got his official notice. He made the team! Jake was ecstatic! When he got home I had him read the email and click on the registration link. I let him do the electronic registration and acceptance. On Sunday he will get to meet his coach and hopefully his teammates.

Look at that face. 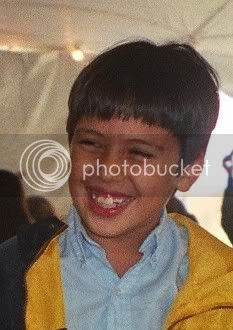