Yesterday we set up our wading pool. It was a beautiful day, with light clouds and in the low 80s. Max and Rebecca were very pleased over the prospect of splashing about.

They watched me drag it out from under the deck, roll it across the lawn and hose it out. It was extremely dirty. I had cleaned the leaves and sticks out a few months ago, but it was filthy from the dirt and sand that had been placed in it. The underside was just as bad with its assortment of spider webs. Max and Rebecca loved it when I starting hosing out the pool. They would squeal with delight whenever the spray got near them. After a long session with the hose I then got a sponge and bucket full of suds. It actually wasn’t too bad. The grime came off with only a little scrubbing.

I then placed the pool near the edge of the lawn under a tree. The grass is not very enthusiastic there and the shade makes it a bit more pleasant. I placed the hose in the pool and proceeded to fill it up. Max and Rebecca were dancing about in anticipation. Nate even buzzed out, but he was sent back inside to get ready to go. He and Jake were going to their piano teacher to perform for her and a judge. Nate was disappointed, but I promised he could splash about afterwards. Finally it was filled. I dragged a chair nearby and settled down to supervise. They were so happy. After a bit I got Larry out to watch them. I had to drive Jake and Nate to their teacher.

Today was cooler with a threat of rain, but Max and Rebecca were not deterred. They wanted to go right back out. So we did. 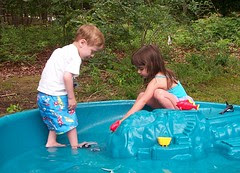