It’s that time of the week again for the Axis of Weevil Thursday Three, special travel edition. The always entertaining Jordana is hosting this week’s edition at Curmudgeonry.

Pomp and Circumstance
It's graduation time for college students and high school students will be following soon. Some kids even get preschool graduations. So let's direct our thoughts towards graduation ceremonies.

(1) Who was the most memorable (good or bad) graduation speaker at a ceremony you've attended -- not necessarily your own? The only graduation speakers I remember are Marian Edelman and Andy Rooney. Both were at my college.

Ms. Edelman was the speaker at my college graduation. I’m sure she did a fine job, I just don’t really remember very much of her speech. I had been up very late the night before and I had come to a cat’s whisker of being arrested. My friends and I had had gone to a beach after hours in the dark. We were not causing trouble, we just like going to the beach at night to talk. It felt wrong when got there and we never made it to the beach. As we sat in the car the police pulled up. Stupidly we ducked down to hide, but he had us. After some intense questioning we were released and told not to do this again.

Andy Rooney was the speaker at friend Kathy’s graduation. She went to the same college as me, but was two classes ahead. This was in 1985 and Mr. Rooney was still entertaining. His most memorable remark was this acknowledging the college’s President’s introduction. In essence he said it was always hard to follow a brief and witty introduction and that he thanks the President for sparing him. Ouch!

It is interesting to look back at a list of past commencement speakers. My college has been all over the map. 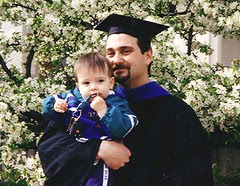 The most recent was our son Nate’s graduation from preschool which I’m counting, but I actually missed do to some sort of toddler illness (Max’s not mine).

3) After finishing high school and/or college what did you do for the summer? After high school I don’t really remember. I did an assortment of summer jobs such as waitressing and exercising horses. After college I worked at a florist. I did some deliveries, ran the cash register, watered plants and picked wildflowers such as Queen Anne’s Lace. Then I got my first real job as a lab tech at Yale Med.

Bonus Question:
What was your favorite graduation gift? My favorites were a typewriter for my high school graduation and a string of pearls for my college graduation. One was practical and served me in good stead and the other made me feel pretty and all grown up. I think you can figure out which was which.