This morning Max, Rebecca and I went grocery shopping. When we got there I noticed a large portion on the parking lot was roped off. As we went into the store I noticed the posters for Ukrop’s Richmond Race Fest

Oh yeah, Nascar is coming to RIR this weekend.
During the week before hand show cars pop up all over the place.

Then the trailer for the Tide car pulled up. Cool! We’ll check it out when we are done.

Grocery shopping was its usual mixture of fun and excitement. Lately Max and Rebecca have taken to spilling out of the cart and dancing about as we move through the store. It is a bit chaotic and very exasperating for me. This time I announced that if they stay in the cart they will get a treat. It worked. There was only a little bit of squabbling which I solved by separating them. Max stayed up front and Rebecca went into the traditional seat by the handlebar. When I had finished my shopping I wheeled then back to the bakery. Max picked out a bagel and Rebecca a chocolate iced doughnut. I decided I deserved a treat as well and got another doughnut for myself.

After checkout we loaded up the van and then went to go see the car.

The car was still in the trailer, but we were nicely greeted by the man setting it up. He gave a poster to both Max & Rebecca and said that he would be getting the car out in about 15 minutes. Oh, and if we bought any size Tide product and showed him the receipt we would get a hat and a diecast model of the car (hot wheels/matchbox size). He then gave me a coupon.

Well, I actually like Tide and I can always use more laundry detergent so I accepted the coupon. We all thanked him and I herded the dynamic duo back to the van. From across the parking lot in the safety of the van we watched him unload the race car. Boy was it loud. I’m glad we were so far away.

After the car was driven out we went back into the store. I bought some detergent and put it into the van. Max and Rebecca were eager to go back and really see the race car. As we walked up I told them that Max could have a car and Rebecca a hat. When we got to the table that the man had set up I tried to show him the receipt, but he just waved it away. Meanwhile both Max and Rebecca had grabbed a car. I tried to persuade Rebecca to go for a hat, but no luck. Then Max thought the hats looked good too and snagged one as well. At this point the man was very kind and said that since we were the first people to stop by they could both have a car and a hat (He must have small children of his own). Of course it didn’t hurt that Max was wearing his brilliant, dare I say Tide, orange shirt. 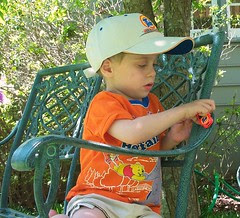 Rebecca still passed on the hat, so we thanked him and then we checked out the car.

It is fun to get a close look at the show/race cars. The interiors are so utterly stripped. I pointed out the steering wheel that was off of the column and neatly tucked by the gear shift. It made me think of Mr. Bean. The funniest part about stock car racing is the headlights. They don’t need headlights and they would make an awful mess when broken. As a result they have fake headlights in the form of stickers, so much for the cars being stock. Once we were done looking at the car we left with a cheerful wave and made our way home.