Friday and Tuesday are laundry days. This keeps the dirty laundry at a manageable level. I have seven laundry baskets, one for each member of the family and one for sheets and towels. As I pull stuff out of the dryer I sort it. It usually takes a day (or two) for it all to be put away.

The other day I encountered this sock.

normal sock
Originally uploaded by Teckelcar.
It is a perfectly normal sock with a hole in the heel. I generally chuck them when they get to this point.

Then you flip it over.

Good lord! What happened? Here is the sock again with Jake modeling it. 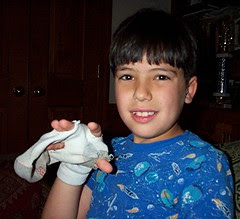 We do have a puppy in the house, but I really don’t think he did this. It doesn’t look like the jaws of destruction’s work. When he has unfettered access to an object it gets completely destroyed. This has just a bunch of nibble holes. Generally I’m the one who rescues objects and I have yet to have fished a sock out of John’s mouth.

I guess this will have to remain a mystery.

Farewell sock, you had served us well.