Max has become very enamored of Star Wars lately. We just got episodes IV, V and VI on DVD. Episode IV was a big hit. Max was very concerned about Obi Wan after Darth Vader struck him down, but I was able to reassure him that he was not dead, just invisible. The later voiceovers were a comfort for Max.

Now I get to listen to Max tell me how Darth Vaber is not nice and that he hit Kenobi. Then he puts on a black fire helmet, wraps himself in his blankie and waves a bat about. He is the cutest Vader impersonator ever.

Here he is dueling with Nate. 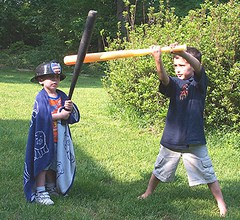 And yes, like Jordana, I got the spoons. I bought four boxes of high octane breakfast sugar. I got only two at first, but Max and Rebecca could not be denied. At least she actually uses it... sometimes. Any way, they are way cool. We ended up with four red ones, much to the kids disappointment and to my relief. There will be no arguments over which spoon belongs to which child.