Apparently I Took The Wrong Child To The Doctor 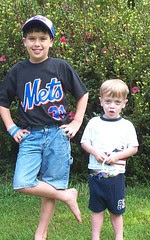 Jake&Max
Originally uploaded by Teckelcar.
On Friday Max was grumpy and difficult; it was a relief when he settled down for a nap at 3:45 pm. He slept until 5:00 when we briefly awoke, ate a few crackers, wrapped himself in his blankie and then curled up on the sofa to sleep some more. At dinner time (about 6:40) we let him sleep. Larry and I decided that when Max did awake I would feed him and then take him to the walk in clinic not far from our house. At 7:00 Max came to the dinner table to join us. He was pleasant and very chatty.

After dinner I stuck with our original plan and took Max to the doctor. He hasn’t taken a three hour nap in over a year and he was a little grumpus earlier in the day, a good indication of a cold. That and big brother Nate was diagnosed with strep throat last Monday.

Amazingly we were back home in under an hour. They did a strep test and it was negative, but with Nate being sick and the fact that Max has CF we felt it was prudent for Max to go on antibiotics. Max talked a blue streak the entire time and I was exhausted when we got home.

That night I was up every two hours. Max was fine, but Jake was a wreck. He came to our room in tears at 2:00 am. He felt wretched and he could not sleep. I was not keen on giving him anything because he has a history of vomiting whenever he gets in such a state and almost anything could set him off. I told him to go sleep on the chaise and went back to bed. Sleep, however, was not possible. Jake kept moaning and groaning on the bed. I finally told him he had to go back to his room because I couldn’t sleep for all his noise. He promptly burst in to tears and with great wracking sobs he promised to be quieter. I held firm and escorted him back to his room. I explained to him that it was better for everybody if I got some sleep. All the while I felt horrible for what I was doing, but I had to do it. I tucked him into bed and staggered back to my now peaceful bedroom.

Fifteen minutes later I was startled by thudding footsteps and the light in my bathroom snapping on. Larry was still by my side so I called out “What are you doing?”

“Why are you using this bathroom?”

“I don’t know, something woke me up.”

At that point I realized that Jake had woken Nate up. Poor Nate, sleepy and confused, had come to us and remembered that he was not allowed on our bed unless he goes to the bathroom first.

A few minutes later he was Larry’s side ready to crawl into our bed. Normally Larry is so sleepy he lets Nate in, however this night Larry was wide awake. Together we told Nate to go back to his own bed.

At 4:30 am we got a repeat appearance from Jake. Again he was in tears. This time we both told him to go back to bed. He was even louder than before in his protestations. In fact he even woke up one of the dogs. After I led him back to bed I could hear Rally softly moaning in her crate. As I lay in bed I desperately prayed that Rally would go back to sleep. I really did not want to go downstairs and let the dogs outside. After about ten minutes Rally gave up and went back to sleep.

At 7:00 am we then had to drag ourselves out of bed. Nate had a 9:00 am soccer game. Jake had a game too, but he was feverish and in no shape to play soccer. I would take Jake to see the Doctor after Nate and Larry returned from soccer.

All throughout this Max slept like a little brick.
Posted by Sarah at 11:27 PM