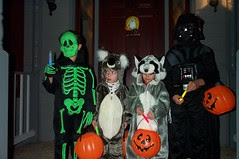 Halloween2005
Originally uploaded by Teckelcar. Today was a busy day. I had a bunch of errands to run this morning and a dozen pumpkins to deal with before nightfall.

After the boys got on the bus Max, Rebecca and I headed back to the house. As the dynamic duo entertained them selves I paid bills and gathered the recyclables together to drop off at the curb. Once I was done we first went to supermarket where Max and Rebecca scored some lollipops. Then we went to the bank, where we got more lollipops. Our last stop was the Post Office, where there were no lollipops (a good thing in my eyes a very sad thing for the under 5 set). Then we headed home for some sort of lunch that did not involve candy.

After lunch I finally sat down and cleaned out our 12 pumpkins. Yes, that’s right, 12 pumpkins. I love Halloween and I love carving pumpkins. This is the only holiday that I do any decorating and I go whole hog. I am however not a complete nut and the kids are encouraged to design the pumpkins. Before the boys headed to school I had all four pick out three pumpkins apiece. I would clean out the pumpkins during the day; help Max and Rebecca with their pumpkins and then aid Nate and Jake when they get home from school.

Once the pumpkins were all clean and ready to be carved we headed out on a dump run. I really need to get rid of our garbage and our pile of cardboard was getting out of control. I could do curbside recycling of the cardboard, but then I would have to cut it all up. It is much easier to flatten it and take it to the dump. Max and Rebecca were more than happy to go along since the dump always results in lollipops. On the way home Rebecca fell asleep in the car.

Back home I placed Rebecca on the sofa. I then headed outside to string the pumpkin lights along our front walkway. When they were all plugged in I went back inside. Max and I then settled at the table and he directed me on how to carve the pumpkins. One of his pumpkins was unable to stand upright so we improvised and carved it with the pumpkin lying on its side. It was a nice quiet moment with the two of us working on a project together. Then it was Rebecca’s turn. I tried rousing her from her nap, but I wasn’t very successful. She was only half awake and she was not interested in pumpkin carving. So I decided that I would carve two without her input, I would save the third one for when she was a bit more alert. Just as I had finished the second pumpkin it was time to meet the boys at the bus stop.

Jake and Nate were very excited. As an added bonus they had no homework, a sensible decision from their respective teachers. I first corralled Jake and gave him a sharpie to draw his designs on his pumpkins. I then headed up to the attic to fetch out pumpkin cutters set. Pumpkin cutters are essentially like cookie cutters, but using traditional pumpkin carving shapes. They are much safer than knives and Nate loves whacking on them with the world’s smelliest rubber mallet (it came with the kit and it reeks). I then alternated with Jake and Nate, either carving or steadying the pumpkins. We were done in short order and took all of the carved pumpkins outside to the front of the house.

At this point I tried to awaken Rebecca again and I was much more successful. She was much more alert and was willing to help with the carving of the final pumpkin. After a small discussion we settled on a kitty cat. If you click on the picture of Jake below it will take you to a whole set of photos of the kids and each of their pumpkins. 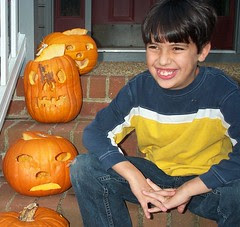 Jake1
Originally uploaded by Teckelcar. Next is a picture of the front of the house with the pumpkin lights on and the pumpkins all lit. If you look carefully (click the picture then “all sizes”) at the second floor window with a light in it, you can just make out a white blob that is Eek the fish.

pumpkinlights
Originally uploaded by Teckelcar.
Then it was time to make dinner. It was a quick affair of hot dogs for the kids and steak kabobs for the adults. Finally it was trick or treat time. This year I ended up taking the kids and Larry manned the candy bowl at home. It was perfect weather, the velvet black sky was filled with brilliant stars and not a single cloud to obscure them from sight. With glow sticks and buckets in hand we headed out with our wagon. We went to a fair number of houses and Max, Rebecca and Nate alternated between walking and riding in the wagon. It was a very happy crowd when we headed back home.
Posted by Sarah at 10:29 PM