Funeral for a Fish 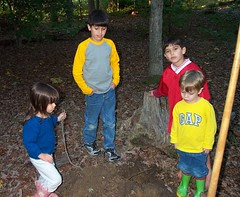 funeral
Originally uploaded by Teckelcar. Last weekend I had to do something about one of our goldfish. For the past five years we have had two goldfish that we inherited when our friends down the street moved. One fish is a Red-Capped Orada (bottom picture) that was renamed Eek and the other was a Calico, renamed Cart, that later turned pure white. They were normal sized goldfish when we first got them. Since then they have grown enormously. Their bodies alone are the size of a little league baseball. I had positioned their tank in front of one of the windows in Jake and Nate’s room and you can actually see them when standing outside and looking up at the their second floor window.

Cart had always been the more sensitive of the two fish. When we were without power for several days post hurricane Isabel, Cart was the first one to feel the affects of low oxygen levels (the tanks pump wasn’t working, so the tank was no longer getting re-oxygenated). Cart would listlessly float about the tank until I manually agitated the water. After the first day I tracked down a battery operated pump and Cart slowly recovered.

For about a week Cart had been floating oddly in the tank sometimes sideways and occasionally upside-down. In the end Cart settled on the bottom of the tank, lying on his side jammed in the corner. At first I keep freeing Cart, but I knew my handling of him was just furthering his stress. He was still eating, but his quality of life was close to nil. It did not look like Cart was going to get any better.

I ended up having some very serious conversions with Jake and Nate over what would be best for Cart. I broached the subject with Jake first, when I was alone with him in the car. I knew he would need more time than Nate to come to terms with the whole idea of euthanizing Cart. He was very upset at first, but he did agree with me that now life was not much fun for Cart. With Nate I waited for a moment when everybody else was outside. He too was upset, but he quickly understood what needed to be done. I had to talk to the boys about what I was going to do, because I will not lie to them and say Cart just died. It would not be right. That Sunday I brought an end to Cart’s suffering.

So for the past week I have had a fish in the freezer. Between soccer, rain and homework we have been too busy for Cart’s final arrangements. The first time I opened the freezer door I was unnerved by the site of the frozen fish staring at me. Subsequent times I was less and less startled by it. Finally on Saturday it was clear and dry and I decided it was time. I wrapped Cart (still in his baggy) in tissue and placed him in an old check box. We went to the edge of our property and chose a spot for him. Max and Rebecca came along with Jake, Nate and I. Up until this point Max and Rebecca had been unaware of what was going on. I carefully explained to them that Cart was dead and we were going to bury him. They were fine until I placed the box in the hole. Rebecca promptly burst into tears and pleaded with me not to bury him. Max meanwhile kept asking me if there was more water down there and would it make him better. In the end Rebecca got over it, but I really don’t think Max grasped the whole concept of death. I really dread the day when we lose one of our dogs.
Posted by Sarah at 11:44 PM