We have a minivan, a Ford Freestar to be exact and we treat it as our hauling vehicle. I’m very fond of this van and I really like the improvements that have been done since our old Windstar. The biggest improvement is the safety canopy, car manufactures have finally figured out that airbags are good for the rear passengers too. Then there is the DVD player which acts as a child neutralization device for long trips. But the best improvement is the rear hatch’s handle. Instead of the traditional lever release it has a pull handle which is a much more ergonomic design and I love it. 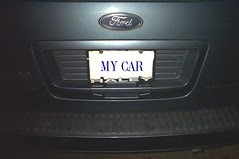 car2
Originally uploaded by Teckelcar. Yesterday when I was at the dump I somehow ripped the van’s handle off of the rear hatch. I had just chucked all of our garbage and I was closing the rear lift gate when I noticed that it had not closed properly. As I tugged on the handle to lift the hatch the handle came away in my hand. 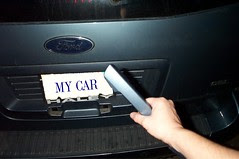 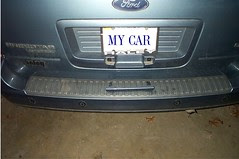 car5
Originally uploaded by Teckelcar. I was stunned for a moment and tried to stick it back on. Then the absurdity of the situation gripped me. I had just broken the handle off of a less than two year old car. When I told Meryl later that night she noted that it was a definite Hulk moment. The boys were very impressed and wanted to know if this means I have big muscles.

Anyhow back at the dump my initial concern was that I may not be able to reopen the rear hatch, trapping my stinky garbage can inside. When I got home I looked closely at the hatch and I noticed it wasn’t securely closed. It turns out I can open it, but it will not latch shut. After I hauled the garbage can out, I messed around with the van for 15 minutes and determined that: 1) the handle didn’t break off, but instead became disengaged. 2) The latching mechanism is off kilter and that is why I can’t close it. 3) I don’t have the right tools for the job and I should take it in to the dealership. Well at least it should be under warranty. Of course this means I have to clean out the van. I can’t have a stranger see all the filth and heck my in-laws are coming on Saturday so I was going to clean it anyway.

Last night I hauled all of the toys lurking about in the van, broke out the shop vac and really gave the van a good going over. I even tipped up the middle seats to fish out all the stuff trapped beneath them. So this morning I dropped off my relatively neat van at the dealership and I’m stuck home until it all gets sorted out.
Posted by Sarah at 11:24 AM

How'd they fix that broken handle on your Van ?

They replaced the lock asembly and the handel.