On Monday Max and Rebecca got their very own big kid bikes.

I already wrote about Rebecca’s bike last April. It has been sitting in our attic waiting for the right time to be brought out.

At the ripe old age of four they are now old enough and big enough for their own two wheelers. The key thing here is that they are big enough.

We went to our friendly local bike shop with Grandma and Grandpa so they could be part of the excitement. Max immediately headed over to the one bike that was his size. It is the male equivalent of Rebecca’s Lil Darling, royal blue with flames painted on the frame and seat. It is a very cool bike. As the bike’s seat was lowered to fit Max, Rebecca glommed onto a bike identical to the one we had at home.

Once the bike was all squared away we picked out helmets. Rebecca, of course, selected the pink one with strawberries and Max went for a blue helmet with cartoon like racecars careening around on the lower half. At this point Grandma and Grandpa had to leave for the airport. The bikes proved to be a good distraction and no tears were shed when they left. It wasn’t until much later in the day that Max realized that they were truly gone.

Then I paid our bill and packed up the van with our new gear.

Once home I brought Rebecca’s bike down and the two of them happily sat on their bikes in the garage, slowly pedaling about. After a bit Max rode onto the driveway and out onto the lawn, Rebecca soon followed him. They didn’t go very far and soon called it quits. Today we went out on the road to the very end of our cul-de-sac. 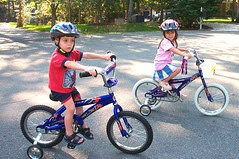 bikes
Originally uploaded by Teckelcar. It was a little unnerving for them because of the slight hill, but it was a good start. By next spring they should be careening about on their own.
Posted by Sarah at 3:32 PM