Today Nate’s class had its Fairy Tale Parade. All of the first graders were ask to select their favorite fairy tale character and bring a simple costume to wear this afternoon at school.

After a great deal of thought Nate settled on the Baby Bear from Dusty Locks and the Three Bears. On the sheet provided he drew a nice picture of a bear and finished the statement “The character I choose is baby bear. I want to be this character because he is funny and he has the best lines in Dusty Locks and the three Bears.” All that was left was the costume. We ended up getting a new oatmeal color sweater last night and a brown hat. My idea was that I could attach little ears to the hat and we could use some Halloween make up on his face to make him look a bit more ursine. When we got home I remembered that Max and Rebecca had some very cute teddy bear hats from when they were younger. After some digging I found one and wonder of wonders I could jam it on his head. The costume was complete.

The parade was scheduled for and I showed up with Max and Rebecca in tow. Here is Nate as his class wound its way through the school. 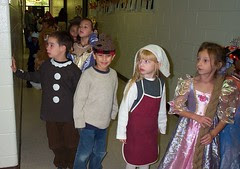 fairytale
Originally uploaded by Teckelcar.
From left to right we have:
The Gingerbread man, the Fairy Godmother, Nate, Cinderella (before), Rapunzel and the sleeve of Cinderella (after).

After the parade each child sat in the story chair and described who they were and why. There were numerous Cinderellas, two Fairy Godmothers, Peter Pan, Captain Hook, Puss in Boots and a slew of others. The Puss in Boots was very interesting. When the boy was asked from what fairytale did the character come from he replied Shrek. It was not completely unexpected answer, but not quite keeping with the book idea. Well, at least it’s a good movie.

When it was Nate’s turn he gave me a little surprise. He told the class that he was the Wolf and he picked the Wolf because he likes wolves. So much for his original choice of being Baby Bear, it turns out his teacher thought he was a wolf when she first saw him. Nate liked that idea so much he switched over to being a wolf instead.

Then we all had cupcakes and cookies for snack.
Posted by Sarah at 3:57 PM