Four years ago our family went from four to six when we brought these two little babies home.

babytwins
Originally uploaded by Teckelcar. I remember it all clearly when I waddled into the hospital on that fateful day. I was at 36 weeks gestation and I was scheduled for an induction on that October 15th. All throughout my pregnancy I had been starving, but that morning I was only mildly interested in food. I took this as a hopeful sign that the end was near. I was miserable, I couldn’t sleep and my body ached from the strain of carrying two. I was ready to have those babies.

Fast forward to yesterday. Here are their cakes, decorated to their specifications.

twincakes
Originally uploaded by Teckelcar. Rebecca informed me after Jake’s birthday that she wanted a chocolate (as in a basic yellow cake frosted with chocolate) cake with a pink pony on it. Three and half months later she still wanted it with the only addition of purple to the pony’s color scheme. Friday I baked the cake and then frosted it with homemade chocolate frosting. On Saturday I drew a pony on the cake with my cake tester and then filled it in with pink frosting.(I do have one small confession about the decorating frosting. I cheat and use canned frosting. I just get plain old vanilla and used my fancy liquid paste coloring. It is much cheaper and a whole lot easier than making it from scratch. But the rest of the cake is all homemade.) 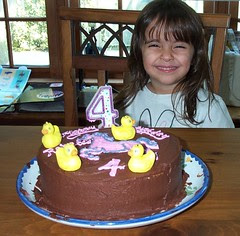 Rebeccacake3
Originally uploaded by Teckelcar. Rebecca then helped me outline the pony in purple. She was pleased to be photographed with her cake.

Meanwhile all Max wanted was an orange cake with green frosting and truck candles. He was less interested in the cake decorating process and did not assist me like his sister. As you can see from the picture below he also did not want to be photographed with the cake. 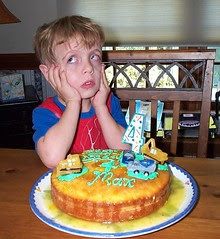 
I do not know what it is about this picture, but it cracks me up every time I look at it. It is almost like he is saying “Enough with the pictures, just let me eat my cake.”

Sadly, I made him wait until we were all ready.

The party itself was held mid-afternoon with Grandma, Grandpa, and Aunt Meryl in attendance. I’ll write more about their party tomorrow. I think I’ll go have a piece of cake.