This week Terry turns the tables and gives us the answers.

SO, donning my satiny, befeathered turban, I will now take this envelope which has been kept in a hermetically sealed mayonnaise jar on Funk and Wagnall's doorstep and which contains a question (or three, or whatever), hold it to my head, and tell you the three answers that come to me...

There you have it! Now then, go off and either make up a question that ties all three of those together in a HI-larious way, or just make up three questions that each thing is the answer to. An example might be “Name two things ill-suited to conducting American foreign policy and something you would find in a carpenter’s tool belt.” Just remember, though, unlike the example, hilarity is required! Or suggested. Or not.

I, as I commented earlier on Possumblog, am very bad at this sort of thing. So I copped out and offer this:

What were the last things on Russian Orthodox Patriarch Alexy II’s mind before his unfortunate accident at the Danilov Monastery in Moscow. 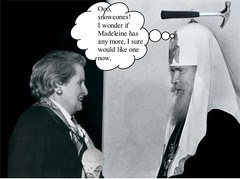 ThursdayThree
Originally uploaded by Teckelcar.
Posted by Sarah at 3:49 PM