This past weekend was quite busy for us. On Saturday, in addition to Max and Rebecca’s birthday we also had two soccer games. Of course the games were at the same time and about a 45 minute drive apart. So we did the sensible thing and divided to conquer. I had the added bonus of dropping the dogs off at the kennel. Grandma and grandpa would be flying in that afternoon and it is much easier to kennel the dogs than make grandpa suffer, he is very allergic to dogs and is an asthmatic to boot. We love grandpa and we want him to stay healthy.

Unfortunately it meant that I had to leave the house at with three dogs, Max and Jake in tow. We arrived at the kennel right when it should be opening. The office was still locked and the woman who works the desk was outside with us. It turned out her husband dropped her off and left before she checked the door. Luckily I had my cell phone and she summoned him back. She then sent me down to the kennel to drop off the dogs. They know me well and she would do the paperwork later. Then it was off to soccer. The night before I decided that drive thru McD’s pancakes were the way to go for breakfast. Quick, easy and everybody would be happy. However the rest of the area thought a little past was a good time to go through the drive thru as well. I ended up parking the car and going inside. Pancakes in hand we then headed north to the soccer fields. With all of our delays including a train crossing we were 8 minutes late for the pre-game warm-up. The game itself was exciting and Jake’s team completely dominated. When Jake was finished we headed home. I still had to decorate the cakes and Larry and I had to finish cleaning the house.

I just finished vacuuming when my in-laws arrived. They were literally mobbed by the kids. As they swirled about I was able to put the finishing touches on the cakes. Rebecca was fascinated and I let her help me with her cake. She was very excited about the end result. Max was uninterested the decorating, all he wanted to do was eat the cake.

The party itself was just cake and presents. Max was a real pro at blowing out the candles. 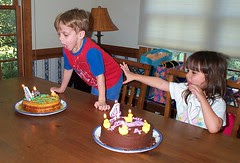 
Rebecca was unsure and actual told Max to stop. It took her awhile, but in the end she did blow out her candles. Then we all had pieces of cake as a nice mid-afternoon snack followed by the presents.

For dinner we asked the birthday duo what they wanted to eat. They settled on pizza and Chinese food or as Rebecca put it Pinese food. We have a decent Chinese restaurant nearby that has a pizza joint a few doors down. The pizza is ok at best, but it makes for a good fall back for the pickier members of the family when we get Chinese food. I like Rebecca’s new word and I think I’ll use it the next time we have pizza and Chinese.

Then it was up early again Sunday for Hebrew school for Jake and Nate followed by another soccer game for Jake. Happily this game was at our local field so we did not have to drive vast distances. As an added bonus the small airfield across the street from the park was having an air show. We got to see all sorts of vintage and stunt planes circle overhead during the game. It was a bit distracting to say the least. The game itself was fun to watch. Jake’s team tried very hard, but in the end the other team won. Then we all headed home.

All in all it was a good weekend.