And Yes, We had Cake

I hope y’all had a good Thanksgiving; we had a nice relatively quiet one.

I like to target for an early dinner, say about 5:00-5:30pm. This is for two reasons. One, I can not be bothered to get up at the crack of dawn to deal with a turkey and the preparations necessary before I can cook it. And two, after I have gone to the whole effort of making a lavish spread I do not want to then have to make dinner a few hours later. Larry and I would be content to pick at the bird and munch on leftovers, but this does not work with the rest of the family.

The bird was a bit balky this year and wanted an extra hour in the oven. So we ended up eating at 6:30, our normal dinner hour. Unfortunately the garlic mashed potatoes got a bit cold, but were yummy none the less. For dessert we had a pumpkin pie and a turkey cake.

The pie was very good. To dress it up I made a little cut out of a pumpkin surrounded by little leaves. Much nicer than a plain old pie and it uses up some of the excess pie crust. 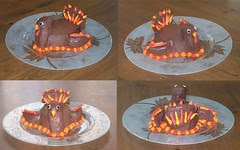 turkeycake4
Originally uploaded by Teckelcar. I had a small (7 inch) orange cake round parked in the freezer. I had made it from extra batter from Max’s birthday cake. It was a case of either toss or bake and I opted to bake it. On Wednesday night I pulled out the round and carved out the body of the bird. I then used the scraps to form the wings, tail and neck. I didn’t have a large enough piece for the head so I faked it with a ball of large crumbs and lots of frosting. I frosted the whole mess with my favorite chocolate frosting:

Place the chips and the butter in a microwave safe bowl. Then microwave for about a minute on high. The chips and butter will not be completely melted, but they will be soft. Mix until it is smooth. Then stir in the milk and vanilla. Using an electric mixer slowly add the sugar. Continue beating until the mixture is smooth. Don’t worry, it will be very runny. Refrigerate for one hour, beating it every 15 minutes. * You can use regular butter, unsalted is better.

Once the turkey cake was frosted I put it in the fridge over night to set the frosting. In the morning I made a half batch of orange frosting and then added color. I think the whole thing came out rather well. Sadly the cake itself was a bit stale. Apparently it had been in the freezer a little too long. At least we had the pumpkin pie. Next time I’ll use a fresh cake round.
Posted by Sarah at 2:07 PM