Oh, C’mon, Have Another Slice

Saturday we had Meryl over for a little birthday celebration. I asked her earlier in the week what kind of cake she would like to have. I have a fairly large repertoire and she has sampled a fair number of them. She got to down to Max and Rebecca’s birthday cakes from last month, but she could not decide which one. So she told me to have the kids decide.

The kids were of course no use. They were evenly divided between Rebecca’s chocwet (at least that’s what Rebecca calls it) cake and Max’s orange cake. Thinking back to their birthday party I remembered how much Meryl enjoyed taking alternating bites between the two cakes. That settled it; I would combine the two into a frankencake. It would have a layer of orange cake, a layer of yellow cake (the non-radioactive kind), orange filling and the whole mess would be frosted with chocolate.I baked it on Friday. 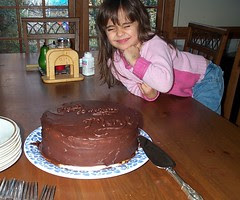 merylcake2
Originally uploaded by Teckelcar. I halved the recipe for my yellow cake, which was easy enough to do. Then I made a 2/3 batch of my orange cake. It has 3 eggs hence the 2/3s, the yellow was much easier to scale down since it uses four eggs. As I was making the frosting I was on the phone with Meryl. Rummaging about in the pantry, I realized that I was almost out of confectioner’s sugar. Oops! I mentioned this to Meryl and that prompted her to tell me “The Horsehair Cake Story.” A funny misadventure in cooking that resulted in a very special meal. I hope she tells it soon over at her place (Hey Meryl, you did say you would post it... someday.) I carefully measured out the sugar I had on hand and... Dang! I was a cup short. Well I could fake it with my regular sugar; it would just mean that the frosting would be a bit gritty. Oh it would still be yummy, just not the same silky smooth texture. When I was all done I piped “Happy Birthday Meryl” on top of the cake and tucked it away in the garage fridge. 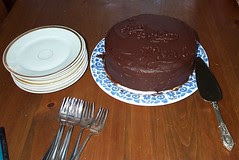 merylcake1
Originally uploaded by Teckelcar. The cake was a big hit. The flavors intensified overnight and the resultant cake was delicious. Larry was able to get Meryl to eat a second slice with minimal arm twisting and I packed her an enormous slice (it was the size of two slices) to take home. We still have a fair amount left. Would anybody else like a slice?
Posted by Sarah at 11:58 PM