fallclassic2
Originally uploaded by Teckelcar. This weekend Jake’s team participated in a local soccer tournament. In his age division there were eight teams entered. The teams were divided into two groups. Each team would play three games, two on Saturday and one on Sunday. Then the two group winners would play against each other for the championship.

Jake’s team dominated in their first two games. They played as a team and handily won both games. This was despite the abysmal officiating in the second game. We experienced random and capricious calls against our team. The most aggravating were the two disallowed goals. One goal was saved just inside the net. The goalie nabbed it and lay just inside for quite awhile until the ref decided it was not a goal. The other one occurred after their goalie did a very nice save. He scanned the field and threw the ball and it ended up just falling about four feet away from him and slowly rolled on the grass. It was a truly horrible throw. Most of the players on the field stood there, stunned when suddenly one of our players seized the moment, ran up and stuffed the ball in the net. In the end we won 4 to 1.

On Sunday our team’s record was 2-0 and our opponent was also 2-0. It was a tough team and they had soundly defeated us during regular season play. But I was hopeful. As I helped Jake with his cleats I told him he was going to be playing a tough team, but I thought his team had a very good chance in advancing to the finials. His team was playing very well together and the players had all shown improvement and had gained new skills. It was not the same team that had been beaten earlier in the season.

Larry then took Jake and Rebecca to the game. I was not going. Nate had Sunday school (so did Jake, but we decided he could miss it this time for his game) and I would be ferrying him up to Richmond with Max in tow. The game was scheduled for 8:00 am and would be over by 9:00. As I sat in with Max while waiting for Nate I called up Larry to get the news at around 9:30. They had tied! Unfortunately due to the formula to determine which team would advance the other team ended up going to the finials. The formula is based on total number of goals versus goals allowed and a few other factors. It turns out that if Jake’s team had gotten one more goal they would have been the team to advance to the finials. So close! In the end I was very proud of what the team had accomplished. 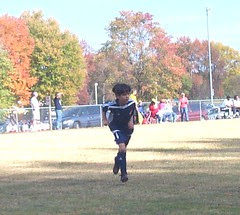 fallclassic1
Originally uploaded by Teckelcar.
Posted by Sarah at 11:30 PM