This little bat is the bane of my existence.

batty
Originally uploaded by Teckelcar. Max got it the last time we went to the zoo. It is made out of some sort of soft, stretchy, squishy, green material. My guess is that it is probably some sort of latex. Anyway, Max loves his little bat. He drags it around all over the house. The first time he mislaid it resulted in a very frantic search on his part. Eventually it was found and that is when I realized that the bat was trouble.

Its small size and squishy nature makes it all too easy to hide and lose. It is also just the thing the dogs like to rend into small pieces. I try to have Max keep it upstairs, but Batty keeps popping up downstairs.

Wednesday Max took Batty for a ride in his enormous dump truck (it’s so big that Nate can sit in the dumper). This would not be a problem, except it was outside, as in outside amongst all the leaves in our very big backyard. If I had known what was going on I would have put a kibosh on the whole idea. Just a few days previously Max decided to give his baby snake (about 3 1/5 inches long, brown and the same stretchy material as bat) a ride the dump truck. The snake was stuffed in the cab and promptly fell out. It was sheer luck that I found it after 5 minutes searching in the leaves.

Of course Batty fell out of the cab. Unfortunately when Jake and Max informed me of the tragedy I thought they meant Max had lost his baseball bat. I told them tough, it’ll turn up later. It wasn’t until an hour later that I realized my mistake. At this point there was almost no hope of getting a coherent story from Max about where he had driven his truck and the wind had been moving the leaves about. I did a half hearted search, but it was getting very dark outside. I told Max that if we ever find Batty it must not go outside again.

Yesterday I did not look, but today I decided to give it a shot. It is brilliantly sunny out and the wind had died down from the past couple of days. I did an intensive search pattern, pushing aside the leaves with my booted foot in a likely section of the yard. Max had driven the truck in circles there and I thought maybe that was where Batty fell out. No such luck. Max bounded outside and I had him retrace his steps. Just as I given up and was about to head inside I spied batty lurking beneath a leaf. Of course it was not even close to where I was searching. Apparently Batty fell out at the beginning of his journey, near the steps to the deck. Max was very happy to get Batty back. 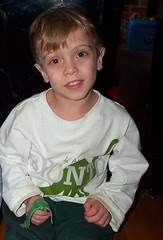 batty&Max
Originally uploaded by Teckelcar. Hopefully he will keep Batty inside from now on, but I doubt it.
Posted by Sarah at 12:53 PM