At Jake’s request I made a pumpkin pie on Wednesday. It has been awhile and all that pumpkin carving had put me in the mood. The first task was to get my pumpkin pie plate out. 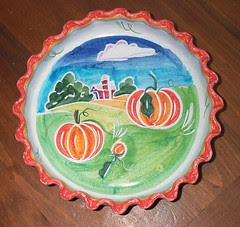 pumpkinplate
Originally uploaded by Teckelcar. Isn’t it lovely? It just begs to be filled with a pumpkin pie. The pan’s fluted edges make it so easy to finish off the crust to make it pretty.

The pie itself is easy to make. It is a combination of three different recipes, one of them being off of the label of Libby packed pumpkin.

Preheat the oven to 425. Combine the filling ingredients in the above order. Mix well. Place the crust in the pie plate and trim the excess crust from the edges and set aside. Pour the mixture into the pie crust. I like to decorate the top of the pie with the excess pie crust. I roll out the extra dough and cut out shapes that I place on top of the filling. Bake the pie at 425 for 15 minutes then reduce the heat to 350 and bake an addition 40-50 minutes. The pie is done when a knife inserted in it comes out clean. The pie is best after it has completely cooled.

*Oddly the original Libby recipe called for one can, 16 oz. At some point during the past decade the can became only 15 oz and the recipe on the label was changed to reflect this. DON”T use the pumpkin pie filling, you want plain solid packed pumpkin.

** This can be optional.

***I use a Pillsbury rolled up pie crust. It is much easier than making it from scratch and they are always going on sale this time of year.

And here is the finished product. 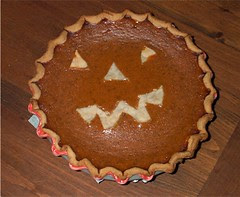 pumpkinpie
Originally uploaded by Teckelcar. Normally I cut out a little pumpkin shape and some leaves to put on top of the pie. But this time Jake wanted me to make the pie look like a jack-o’-lantern.
Posted by Sarah at 10:56 AM