babynate
Originally uploaded by Teckelcar. It was an uneventful pregnancy, the weekend before Grandma and Grandpa came down for a visit and to watch Jake if needed. We had one false alarm, but in the end they headed home before the big event. In the mean time my brother-in-law, Andy came to stay for as long as we needed him. It was a Wednesday and I had dropped Jake off at his preschool. I came home and rattled about the house and took a nap in the afternoon. When I awoke I could tell something was happening. I didn’t worry about it and went off to pick up Jake. On the way home the contractions really started to hit. I realized I probably shouldn’t be driving a car when I had to pull over at one point and breathe through a contraction. Fortunately I was almost home and I got there without further incident.

Larry came home shortly afterwards. Andy and I both met him at the front door. Andy was in an upbeat mood and very chatty. He was also oblivious as to what was going on. As he stood there telling Larry how taking a nap was a good thing, I clutched the banister as another contraction hit. Through gritted teeth I said it was time. Larry immediately focused on me. He cut Andy off and told him we were going now and that he was in charge of Jake. Andy was quite startled, but he was up for the job. I had gone over Jake’s schedule ahead of time with Andy so he knew what to do. Larry and I piled into the car and drove to my OB’s office (the hospital was right across the street from there.)

Larry dropped me off and I waddled up to the office. As I stood there in obvious labor the staff watched me with interest as they readied an exam room for me. To get my mind off of my contractions I struck up a conversation with them. It turned out that a new carpet had been just laid and they were hoping it would stay new looking for a little while longer. (I’m happy to report that it still looked new after I left the office.) I was soon ushered down the hall to the exam room. I still could not sit, so I paced while I waited for one of the OBs. A few minutes later he poked his head in and quipped that it was always a good sign when the patient can’t sit. He helped up on the table and did a quick check. The expression on his face was priceless. His eyes grew wide and you could literally see him go “Holy cow!” I was already at seven centimeters. He calmly told us that we must go now across the street to the hospital. No side trips were allowed. He would call ahead to warn them that I was on my way

Larry hustled me over and again dropped me off and parked the car. He would bring up the rear with my bag. As I approached the elevators to Labor and delivery I sagged against the wall when another contraction hit. A helpful orderly offered me a wheelchair to take me, but I waved him away. Sitting was no longer an option but I was still in good spirits and I was excited that today was the day.

When I entered the maternity ward the nurses’ first comment was that I looked good for seven centimeters. They whisked me to room and got me all prepped. Larry soon appeared and we settled in to wait. Less than an hour later, Nate was in our arms. 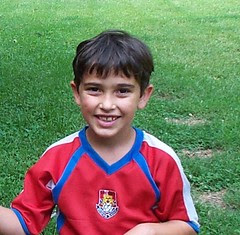 nateG
Originally uploaded by Teckelcar. Today I brought in cupcakes at lunch time to share with his class.

cupcakes
Originally uploaded by Teckelcar. They were a big hit and Nate proudly told everyone that they were completely homemade. He is a sweet little guy.
Posted by Sarah at 11:34 PM