Sunday I took the red dogs with me to an earthdog fun day at this place. 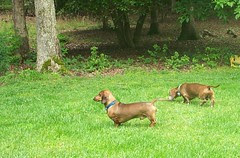 reddogs
Originally uploaded by Teckelcar. Earthdog or as I call them “bark-at-the-rats” events are a way to test a dogs instinct to go to ground. Most terriers and dachshunds were breed to go down into tunnels to root out vermin. It takes a bold dog with a strong instinct to hunt to be willing go down a dark tunnel and confront their prey. This site has an excellent description of what it is all about.

The event would be a good introduction for John. He is a keen hunter of moles in our backyard, but he has never actually gone to ground. Crunch was just coming along for the ride. Crunch earned his Junior earthdog title in 1995 and has one leg towards his Senior title. We have been on hiatus for the past ten years and it would be a good opportunity to see how strong his drive is after all these years, but if we had too many dogs to run I could pull him out.

It was a gorgeous day. I showed up late and I was just able to have John familiarize himself with a set of above ground liners. The liners are just simple wooden tunnel sections that comprise of a roof and two walls. The bottom of this page has some nice pictures of above ground liners. John also got to meet the rats. He was very keen and we were able to get him to go through an 8 foot tunnel with a 90 degree turn. He was a bit hesitant, but the urge to get the rats won out in the end.

Then we moved to where the intro to quarry area. John was not too sure about the underground tunnel. He kept poking his head in and backing out. Each time he would go a little further. At one point he hunted around the enclosure, but he did return to the tunnel. It took about 15 minutes of his backing and filling until he screwed up his courage and charged the rats. We then got treated to the sounds of a baying dachshund. He was quite a handful to pull out of the tunnel. Afterwards he kept pulling me to go back. It was a very successful introduction to the sport of den trials.

After all the other dogs had a try I brought out the old man. We were running ahead of schedule and it would be no problem running Crunch. As I brought him to the enclosure he was eager to go. He knew what was going on and he wanted a piece of the action. When it was his turn, all I did was drop him to the ground and say “git it.” He plunged down the hole and was in full cry before he hit the end of the tunnel. I turned to the people watching and said “This is how it’s done.” He was a barking fool and like his son, a handful to pull out. It was nice to see that the old man still had it in him.

It looks like I’ll be running the red dogs in some earthdog events in the near future.
Posted by Sarah at 4:52 PM