He Did It Again

But this time it was accidental.

Last night as Larry was doing Max’s thumpies he noticed something different about Nate. Larry then asked Nate if he had cut his hair, namely his bangs. After some hemming and hawing Nate did admit he had cut his hair, but this time it was by accident. Last time he thought his hair was too long and gave himself a trim. This time he was cutting some paper and he was doing a tricky angle that required some close up work. Somehow he ended up hacking off most of his bangs.

So I trimmed away the stray wisps he missed and told him that he was no longer allowed to use scissors without direct adult supervision.

Later I had to laugh. I had to maintain a straight face in his presence, but once he was in bed I was free to express myself. I really don’t understand how he could accidentally cut his hair, but I believe him. I found his locks of hair in the kitchen near the drawer where we keep sharp objects and nowhere near a mirror. If it was deliberate he would have done it in the bathroom where he could use the mirror. Also this was an even worse cut than last time. Large random tufts for hair had been trimmed from the front with no rhyme or reason.

Here is a picture of a sleepy Nate this morning with his shorn hair. 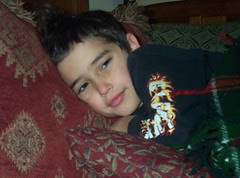 haircutNate
Originally uploaded by Teckelcar. Good thing he is so cute and a nice kid. But no more scissors!
Posted by Sarah at 10:38 AM