Again with the Soccer and Cake

I give my apologies to those intrepid few that looked here for new content Friday through Monday. It didn’t happen due to the combination of a sporadically functional modem, a soccer tournament and visiting family. But it’s all better now.

This weekend was Jake’s penultimate soccer tournament and the end of the season team picnic. As you remember, I was a baking up a storm last week. A normal (or at least sane) person would take a break from such culinary endeavors, but that’s not me. An e-mail went round the team parents organizing a picnic during the above mentioned soccer tournament, I of course volunteered to bake a cake. Then I found out it would be for 48-50 people.

Well I’ve done it before and it was a low pressure situation, so pulled out my book to see how much cake I needed to make. I ended up making a 12 inch base with a 9 inch topper, which was more than enough cake. Since my last cake with each team member listed was a big hit, I did the same thing for this one.

This is a picture of the topper: 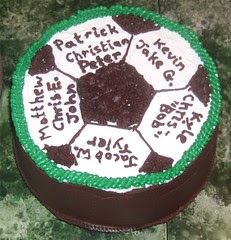 soccertopper
Originally uploaded by Teckelcar. Note this is the size of a regular cake.

And here is the final product with the team and the coach all posed behind it. 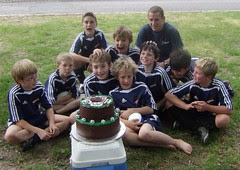 teamU10N
Originally uploaded by Teckelcar. We got a bunch of photos and I kept a careful eye on the whole proceedings. The boys got a bit rambunctious at the end of the photo shoot and just as the cooler got kicked I swooped in and grabbed the cake.

The cake was a huge hit with all the kids. They loved seeing their names on top. Each one wanted a piece of cake with part of his name on it. Meanwhile, I got a major ego boost from all the appreciative comments about the cake in both appearance and taste. The best was when Larry told me that he heard one mom mutter, as she noshed on her piece, “This cake rocks.”
Posted by Sarah at 3:04 PM