Artist of the Week: Digging

Yesterday Terry made the following comment about my dog and his digging:

Well, surely the poor pup doesn't make holes as nasty as the moles do!

Well, even if he does, he's still cuter.

Actually Terry, his holes are worse and in honor of you question John is this week’s artist. 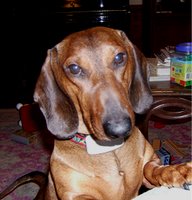 This morning I photographed an example of mole work and of John’s so that we can compare and contrast. I was aided by a ruler and the always helpful Mr. Incredible.

First off, here is a mole tunnel and hole complex. 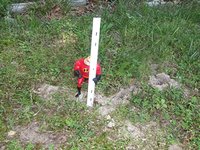 Mr. Incredible held the ruler while I snapped the picture. It’s a bit hard to see, but the ruler has been pushed in the tunnel until it hit the bottom, the depth was about an inch. This particular area of our lawn has a fair number of these ugly tunnels and the lawn is very lumpy and squishy.

Now we move onto John’s work. 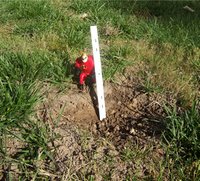 I refer to these as “puppy pits.” Large chunks of grass are removed and a pit is scooped out. Mr. Incredible is on the edge of the pit while he supports the ruler. The hole is about 3 ½ inches deep and about a 1foot x 10 inches. As an added bonus clumps of earth and grass are strewn about in a three foot radius, thus complicating the refilling of the pit.

So moles make nasty holes, but dachshunds expand on them and make ankle twisting pits.

At least John is cute and cuddly.
Posted by Sarah at 11:16 AM