May is Cystic Fibrosis awareness month. If you scroll down there is an informative bit called Facts about CF. The part that caught my eye was this section and I quote:

In 1955, children with CF usually did not live long enough to attend elementary school. Today, according to the CF Foundation’s National Patient Registry, the median age of survival for people with CF is in the late 30s and more than 40 percent of the CF population is age 18 and older. Many people with CF are living into their 30s, 40s, 50s and beyond. In the last four years alone, more than five years have been added to the median survival age of CF patients.

That is one very scary piece of information.

I have written before that my youngest son, Max, has CF. He was diagnosed on March 18, 2003 after a very long and torturous process to find out why he wasn’t growing even though he ate three times as much food as his twin sister. Just before his final diagnosis it was down to either Celiac disease or the unthinkable, CF. I remembering desperately hoping that it would be Celiac. I would have to radically change my cooking and baking habits, but it would be relatively easy. It was not a death sentence.

I remember the phone call from our pediatrician and the sorrow in her voice. It was not good news. My bright, happy little boy had the unthinkable.

I cried for two days.

Then I dried my tears pulled my socks up. I had to do what was best for my son.

Three years ago Max was a scrawny little thing, just skin and bones. Today he is a sturdy, active little guy. He is a bit on the small size, but we are a family of late bloomers (in college I grew four inches during my freshman year). At his last CF clinic appointment he got a gold star. 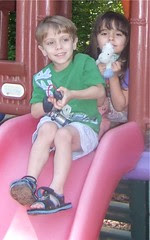 maxslide
Originally uploaded by Teckelcar. He is doing very well.

We are very lucky with all of the therapies and drugs that are available now. Fifty years ago I honestly don’t think Max would have made to his fourth birthday. He was slowly starving to death. But he is living now and he, along with all his siblings, has a college fund and we fully intend for him to use it.
Posted by Sarah at 10:46 AM