Pictures of Soccer and Ice Cream

Saturday I got to test out the new camera at two soccer games and during a post soccer treat.

So far I am very pleased with our new purchase. It is easy to use and takes lovely pictures.

The first game was Max and Rebecca’s. Larry hit upon a new strategy to inspire Rebecca. Since we were the “home” team we had to supply the game ball. Originally we were going to use Max’s ball but in a moment of true inspiration, Larry snagged Rebecca’s soccer ball instead.

You see Rebecca is *very* possessive of her soccer ball. She becomes incensed when someone else dare touches her ball during practice, which is hilarious, because she spends the rest of the time crabbing about going home.

Larry figured if her ball is in play she will actually chase the ball and try to get it away from the other team. This is the hard part of coaching little kids in soccer. The kids spend most of their life listening to their parents telling them to share and not take things away from other children. Then they get dumped on a soccer field and are expected to run around and steal the ball from the other team.

Anyway, Rebecca was a wee bit more inspired and actually got her foot on the ball. 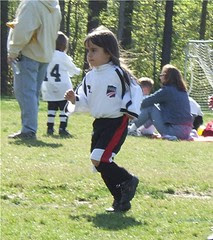 runsoccerRebecca
Originally uploaded by Teckelcar. Max, on the other hand needs no encouragement.

runsoccerMax
Originally uploaded by Teckelcar. Although it does look like we might need to talk to him about grabbing the opposing team.

Max was disappointed that he didn’t score any goals, but he did get the ball away from the team and move it up the field.

After the game we had snack and went home. (Max at this point announced that he “loves soccer because you get to have snack.”)

Once home, the wee ones changed out of their uniforms and we all had lunch. Then it was Jake and Nate’s turn. Since there was a conflict Larry took Nate to his baseball game and I got the rest. Jake suited up for his game and we set out to his field.

Jake’s game was quite good and for a change, Jake was a starter and on my side of the field. So for once I had a good opportunity to take pictures. 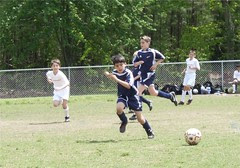 runsoccerJake
Originally uploaded by Teckelcar. I’m pleased with how this one came out. Everything is nicely focused and with crisp colors.

In the end Jake’s team lost, but they did a good job and were very competitive. Jake was really paying attention and was having fun out on the field. This is more than I can say about my entourage. Max was all right. He got a bit bored on the sidelines, but he was able to entertain himself. Rebecca, meanwhile, spent most of the game complaining about how she wanted to go home. I finally got her to stop whining when I oh so casually mentioned that we *might* go out for a treat after the game, but only if they both settled down.

Jake was in an upbeat mood and was happy over the prospect of a post game treat. Since it was his game he got to pick where we would go. He decided that ice cream was the way to go. 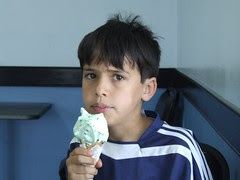 icecreamJake
Originally uploaded by Teckelcar. I love how this came out. He actually agreed to my taking his picture and he didn’t have his cheesy, forced for the picture smile.

Max has no shame is all about the ice cream. 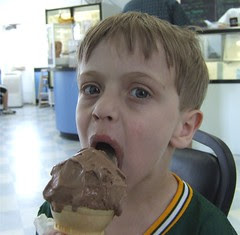 icecreamMax
Originally uploaded by Teckelcar. And yes he did finish it all.

Rebecca had a baby cone and was so quick I never had a chance to take her picture.

Next Saturday it will be Nate’s turn for the camera.
Posted by Sarah at 3:39 PM