Max is starting to figure out money. He notices now that his older brothers get a weekly allowance that enables them to buy things.

Lately Max has been bemoaning his lack of funds. He understands that the boys have to do their jobs in order to earn their money. Max wants a job too.

Jake and Nate have fairly simple tasks to do. Jake has to empty the wastebaskets, take the trash to the garbage can in the garage and set out the dinner plates. Nate has pooper scooper detail in the backyard (this is not such a bad job, he gets to fling the doggy deposits into the woods), keeps the napkin holder filled and sets out the dinner napkins. On payday Dad checks with me to see if the jobs have been completed, if I think they have been slacking their allowance is docked.

Max has been eager for a job, so now he is in charge of the flatware. His task is to set out the forks, knives and spoons at each place setting. Right now it is a bit higgledy-piggledy where the utensils land, but each setting gets one of each and I’m just happy with his enthusiasm.

Yesterday I took Max and Rebecca out shopping to get each of them their very own piggy banks. Mind you, nothing too elaborate or fragile. We went to Wal-mart, I needed to pick up a few grocery items and I thought we could get the banks while we were there.

The only banks Wally world has are little clay pots with big corks and phrases such as “Spa Fund” and “Girls Night Out” emblazoned on their sides. Not exactly the thing for four year old children, although Rebecca was game.

Obviously Wal-mart is part of the consumer culture and is not so interested in the promotion of savings, unless it means by saving you money, you’ll come back to spend more.

In the end we settled on a black wallet with flames for Max and a neon yellow, zippered change purse for Rebecca. I’m tired of the piles of pennies and arguments over whose penny is whose. At least they have a place to stash their money.

Last night Max was very excited about his wallet and his job. He bounced about and was almost giddy with the idea of having his own money. I tucked him into bed with his wallet and retreated downstairs. After a few minutes Larry came downstairs and informed me that Max was out and had informed him that he would only go to bed if Larry paid him. Larry then told me that he called Max an extortionist and refused to pay him. I laughed, the image was so absurd. Larry went back upstairs to attend to the older boy’s bedtime routine.

At this point I decided to call Meryl. Less than 5 minutes went by when Larry returned. Max was adamant about being paid and Larry thought I should deal with him. I quickly got off the phone and headed upstairs. As I rounded the corner I announced that if Max was not in bed not only would I not pay him now, but his allowance would be reduced.

This got his attention and Max scooted back into bed. As I pulled his blankie over him I told Max that demanding money was very rude. We do not demand people to give us money.

Max’s eyes got very big and a sad expression settled on his face. He then said “I apologize. I won’t do that again.”

(He really does say “I apologize.” It’s is the funniest thing to hear a little four year old use such a big word.)

I kissed his forehead, told him he was a good boy and bade him good night once more.

When was back downstairs I called Meryl up and told her the story. She promptly cracked up and she too called him an extortionist. 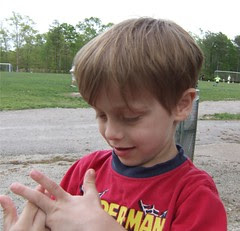