I love Easter, or more accurately Easter candy. One of the best days of the year is the day after Easter when all the candy gets marked down. The good stuff goes fast and I have to show up for the first few days to get peeps for my children (they love peeps, I think they are okay at best). Me, I like the caramel and marshmallow filled eggs. Then I bide my time and watch the prices drop. When they hit 75% off I get my jelly bean fix for the year.

A while back I bumped this site that takes the abuse of Easter candy to a whole new level. The part that inspired me, however, was the forth comment. The “Bunny Foo-Foo” sounded so awful I had to try it. I told Meryl about and she agreed. So I started looking for hollow bunnies.

When I first started looking, they were only half off and still too expensive for our project. At 75% off I couldn’t find any and so I thought we were out of luck. Then my local drugstore slashed their prices down to 90% off. It was too good a deal to pass up, so I dug around in the bin to see if there was anything good left. Amongst the off brand chocolate and egg coloring kits I found one lone bunny buried at the bottom of the bin. For the vast sum of twenty cents it was mine. 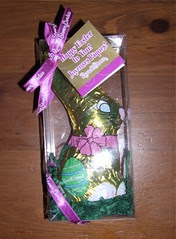 chocbunny
Originally uploaded by Teckelcar. I excitedly called Meryl and she was still game. I set aside the bunny for when we could get together.

We discussed it on and off for awhile. What exactly should we put in it? Then we hit upon the idea of ice cream floats. Yes! That would work very nicely with the chocolate. Or we could even make sundaes. It looked like ice cream is the key ingredient.

On Saturday Meryl came over with some luscious ice cream. Once the kids were tucked in bed we pulled out our ingredients.

The first order of business was the bunny. 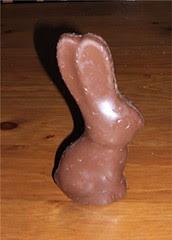 chocbunny2
Originally uploaded by Teckelcar. With a sharp knife, heated in hot water, I cut the bunny along its seam. I figured it was most likely to break and or leak around the seam and it would make for a better presentation. Meryl got some funny shots of me doing the deed. Hopefully she’ll send along a copy. I had loads of fun poking at the little chocolate beastie with my knife. The whole thing was completely absurd.

Sadly one half broke, but I was able to repair it. I first tried running hot water along the edges to slightly melt it and press the bits back together, but it didn’t work. Meryl kept making suggestions about using matches and such to melt it, but I thought that would be too much heat and it would burn the chocolate. Then I remembered that we have a whole mess of Magic Shell in the cupboard. I triumphantly brought it out and declared it as “magic bunny glue.” Of course this necessitated a side trip for the bisected bunny into the freezer to set up the repair. This tricky because my freezer is usually jammed packed and I had to squeeze in the plate.

Once the glued bunny was ready (or more accurately I got tired of waiting), it was fished out of the freezer and the two halves were filled with ice cream. 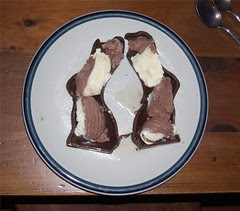 Then we added the sodas of our choice. Meryl is a Coke kind of gal, while I prefer the slightly more unusual Boston cooler, which uses ginger ale. 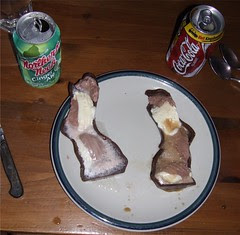 withsoda
Originally uploaded by Teckelcar. Look how nicely the ice cream has foamed up.

Then we dug into our bunny treats. 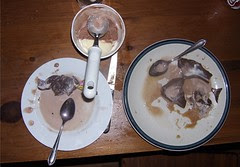 alldone
Originally uploaded by Teckelcar. The bunny was *much* improved with the addition the floats. This makes sense, since we were using some very good ice cream. We didn’t actually finish all of the chocolate, even I have limits to how much cheap chocolate I can eat, but we did have fun. And the magic shell did a fairly good job repairing the breaks. In fact it was so good that the bunny half got stuck to the plate.

Anyhow, this is a grown up version of what to do with a hollow chocolate bunny.
Posted by Sarah at 11:48 PM