Another One Bites the Dust

Last week I noticed John was rooting about in the backyard hunting moles. 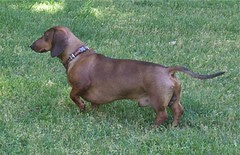 johnhunting
Originally uploaded by Teckelcar. It is one of his favorite occupations and it results in shallow pits scattered about our lawn. This does not make Larry or me particularly happy, so I stepped outside to speak to John about his digging problem.*

When I reached John he looked up at me with an expression that almost said “Dang, she’s going to haul me inside again.” Then suddenly he whirled to his left, plunged his muzzle into the lawn, flipped out a mole and killed it.

Whoa! That was unexpected.

I was stunned, it happened in far less than a minute. As I gathered my wits I approached John to make sure the mole was dead. (I don’t like moles, but that doesn’t mean that they should suffer a long and protracted death.) But John wanted nothing to do with me and kept out of reach with his prized held firmly in his jaws. After a futile couple of minutes I backed off and watched John. When he was sure I wasn’t going to take his mole he dropped it and nosed it about. It was very clearly dead. But John wasn’t quite done with it. Every time I approached him he would snatch up the mole and dance away.

Finally, after lots of praise, I got him to allow me to pat his head and drop his mole. Previous experience has taught me that if our dogs don’t immediately eat their kill, they will just leave it out on the lawn, so I let him keep his prize and headed back indoors. John soon tired of his new toy and abandoned it and followed me in. Apparently moles are nearly as interesting once their squeaker gets busted. I was then able to sneak back out and toss the carcass deep into the woods.

I don’t like all the digging he does, but John is doing something about our mole population. Maybe the little beasties will now stop coming into our lawn.

*Larry was amused by my phrase; it made it sound like John should belong to Diggers Anonymous. “Hello, my name is John and I have a digging problem.”
Posted by Sarah at 1:16 PM