Well that was an adventure in baking.

Last week Larry called home and asked if I could bake cookies for him to take to work. I responded sure and made 1 ½ batches Thursday night.

Saturday was Max and Rebecca’s last soccer game of the season (and possibly Rebecca’s last game ever. To say that she was less than enthusiastic about the game would be an understatement). Traditionally the team, with their families, celebrates by having some sort of party. We eat, pass out trophies and the kids all run around. Since Larry was the coach we picked out a local Italian joint and booked the banquet room.

That morning I got up thinking about the days activities, two soccer games (luckily at the same park), a party and a baseball game. Suddenly it hit me. We were organizing the party and that meant if we wanted a cake I had to do something NOW (because you can’t have a party without cake). Fortunately we have a well stocked pantry and I had just enough eggs to pull it off. I was able to bake it, cool it and halfway frost it before I had to take Jake to his game. Max and Rebecca’s game started at the same time as Jake’s, but they only needed to be there about 20 minutes before the game. Jake’s coach wants the team to warm up for 45 minutes before game time.

The plan was that I would take Jake to his game (about an hour long) and then halfway through I would collect Max, Rebecca and Nate once the dynamic duo’s game was over (approx. 30 mins), scoot home, finish up the cake and meet up Larry with Jake at the restaurant.

Of course it took seemly forever to herd my charges back to van, so I had very little time to finish up the cake. But I was pleased with the final product, my old tried and true 1-2-3 cake with chocolate filling: 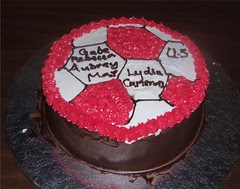 soccercake
Originally uploaded by Teckelcar. I kept it simple by just going for a soccer ball with red edging. At the last minute I decided to add the kids’ names.

It was a big hit at the party. Over half of it was gone when it was time for us go.

For those of you keeping track we now have ½ a batch of chocolate chip cookies and half a cake in our house. So you would think I would be done baking, but noooooo. I had a dog club meeting on Sunday and it was a pot luck affair. Since I had a bunch of grossly over ripe bananas I decided to make chocolate chip banana muffins. It ended up being a double batch. Half would be for breakfast and the rest would go to my dog club.

The muffins were popular and only a few were left over, both at home and at the meeting.

So now we have 1/3 of a batch of cookies, a 1/3 of a cake and a bunch of muffins in the house. Oh and I almost forgot, I also make my usual loaf of Challah for Sabbath dinner on Friday, but that was pretty much finished up that night.

Anybody want to come over for dessert?
Posted by Sarah at 11:26 PM