Artist of the Week: Deck

As I mentioned yesterday Larry and I spent our time at my mother’s house helping her out. Larry focused his energies on improving her internet connection while I dealt with a wobbly step.

There was a small wooden step that was from the rear door of the garage to the backyard. It was a wobbly affair that always tipped sharply if you placed your foot on the right hand side as you stepped down from the garage. It was dangerous, especially in the winter when the step was slick from ice and snow. For the past year she had wanted to have a small deck built off the rear door to eliminate the step. This would have the added bonus of covering up a gravelly portion that was left behind after she had a rear door blocked off and its accompanying staircase removed. Ideally the deck would stretch from the rear door to the beginning of the bricked area that was adjacent to the former steps. However, she couldn’t get any of the local builders/carpenters interested. I guess it was too small a job.

She I decided I would build her the deck. I measured the area and I was pleased to find that it was 8 feet by 4 feet. Perfect! I could get away with minimal cutting. I would use 4 x 4 timbers for the supports and 2 X 12’s for the deck top. I could get the local lumber yard to cut some of the 4 x 4’s in half and I would be all set.

I first put down a weed barrier and filled in the pits with gravel. Then I put the frame together on Tuesday using lag bolts and on Wednesday I finished it with deck screws for the 2 x 12’s.

It was very hot; low 90’s in fact, so I worked in short bursts. Originally I used five 8 foot lengths of the 12 x 2’s, but I opted for a 10 x 2 for the edge board. There was a bit too much overhang and the board was badly cracked. Larry went out and got a nice new board for me while I dragged the rejected board and step out to the front of the house. The beauty of the location of my Mom’s house is that you can stick all sorts of junk out front, put a sign saying “free” on top and it’ll all be gone in a couple of days, including the sign.

So here is the finished product: 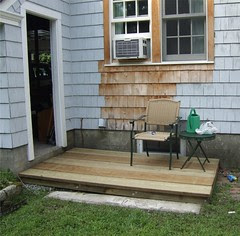 deck
Originally uploaded by Teckelcar. I like that the left over concrete strip from the old stairs fits in nicely with the new deck. It looks like it was always meant to be that way.

She can sit outside and no longer worry about the tipsy step. Her dog is bit suspicious of the whole thing, but Willie will eventually come around. All of my Mom’s friends have been impressed and all say “It’s exactly what you wanted.”

I’m proud of my little project and I’m glad that I could make my Mom happy by making her the deck.
Posted by Sarah at 7:29 PM