The End of Summer

School starts next week, so we are in the final days of summer vacation. The last gasp before the end of summer around here is the County Fair. We went yesterday and the kids all had a great time. I’ll post a bit more about it later, but I’ll share this great picture with y’all. 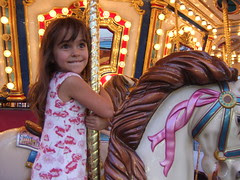 Merry-go-round
Originally uploaded by Teckelcar. Rebecca loves ponies and this was the one ride she had to go on. The boys were uninterested and Larry took them elsewhere. She is still a little too small to go all by herself, so I got to stand next to her during the ride.

She had a glorious time and she got to ride on the prettiest pony.
Posted by Sarah at 11:58 PM