We motored up to DC to go to a ball game today. It was a long and hot day, but it was fun. It was Screech Bobblebelly day (click and then you will understand) and the post game Diamond Dash (kids 12 and under get to run the bases). I, of course, was unaware of this until we arrived at the park. Well actually I did know that the kids would be getting something, I just didn’t know what. We were there to watch baseball and specifically to see the Mets.

When we arrived we were given cards to turn in for the bobblebelly thingy. This was quite different from all the other swag we have gotten at games. Normally they just hand out the stuff as you go in. After we picked them up (We ended up with five. The guy counting out the cards gave us five, but he made it sound like we got four, it was very odd.) we understood why. They are huge, ceramic and in a box. It would have been impractical to try to hand them out at the gate. I’ll post a picture later It’s late and the kids all dragged them to bed.

Anyway, we got our seats, which were by third base, and discovered we were in the no shade zone. It wasn’t particularly hot today, but it felt far hotter in the confines of our section of the stadium. Next time we’ll try to be on first base side of the field. It wasn’t until the bottom of the ninth did we get any shade. Fortunately we came prepared with bottles of water and sunscreen.

It was a good game that really captured the interest of our three boys. 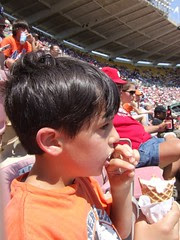 Jakewatching
Originally uploaded by Teckelcar. You can see the concentration in Jake’s face as he watches the game while absent mindedly eats his ice cream cone. 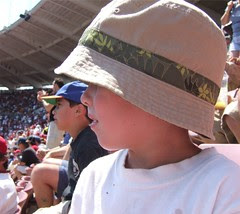 Max&Nate
Originally uploaded by Teckelcar. Nate and Max were similarly fascinated by the game. 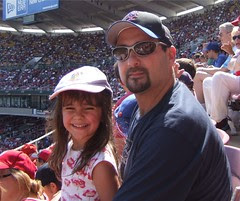 father&daughter
Originally uploaded by Teckelcar. While little Miss Rebecca was happy to be in her father’s lap. Though she did like cheering when the crowd reacted to a particularly good play.

As an interesting side note, I say about a third of the crowd we for the Mets and the remainder were for the Nats. As a result big plays for either team would get a good sized reaction from the crowd.

At the top of the ninth I escorted Max and Rebecca to the designated Diamond Dash meet point. Originally Nate was interested, but he changed his mind would he found out that he would miss the end of the game. At this point Max and Rebecca were eager to get out of the sun and go down on the field. The line for the Dash was huge and wound its way through the stadium. I ended up watching the end of the game on the in house TVs while my two played with a little girl that was just before us in the line. After a long wait the line began to move. We were given cards to fill out (for the photographer) which were collected just after we hit the field.

At this point my two got very excited and I had a hard time keeping them from passing the kids in front of us. 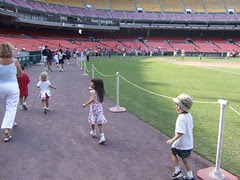 downonfield
Originally uploaded by Teckelcar.
Then it was the big event, the kids entered the infield at first base and the parents were instructed to continue along the warning track and off the field by home plate. I lingered to take a few photos and watch my two run the bases.

roundingthird
Originally uploaded by Teckelcar.
Here they are just rounding third base. Max passed by Screech on third, but Rebecca paused and shook its wing. They had a great time.

Larry and the boys missed seeing them on the field. It was at least 40 minutes after the game ended when we hit the field. So instead we meet them back at the car.

It was a good day.