Artist of the Week: Tennis

And The Tournament Champion, Children’s Division, Is... 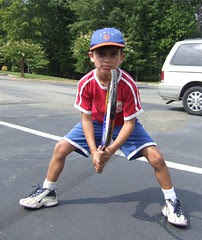 This summer Nate has been taking tennis lessons down at our subdivision’s courts. For a $100 he could have unlimited lessons and by gum we got our money’s worth. The alternative was $10 bucks a pop, but I knew we could make more than 10 and we did. The official lessons ended last week. This week is dedicated to the tournament and all sorts of fun games.

Nate is a game little guy and has yet to encounter a sport he did not like. Tennis was not an exception and he took to it right away. 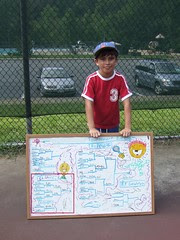 tennischamp
Originally uploaded by Teckelcar. I got this neat photo of him right after the tourney. His age bracket is in the red square. I wasn’t able to snap any of him in action because the fencing is lined with a fine green mesh and I don’t want to be actually on the courts (it’s a bit dangerous in there when all three courts are going). I had a feeling he would do well for two reasons. Firstly Nate is a very competitive little dude and secondly he got a bye in the first round.

I think he’ll be doing tennis again next year. He has fun and it burns off a little of his boundless energy.
Posted by Sarah at 9:22 AM