The Midway is hands down Nate’s favorite part of the County Fair. He did like holding the chick and the barrel ride was fun, but his biggest smiles were saved for the rides. On each and every ride a huge grin was plastered across his face. 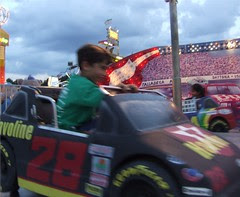 zoomNate
Originally uploaded by Teckelcar. The picture is a bit blurred, but you can see his smile. 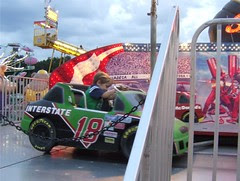 zoomMax
Originally uploaded by Teckelcar. Max, who idolizes Nate, loved the rides too and you can see his grin as well.

Nate is also a very good brother. He rode with Rebecca on the Dragon Wagon. She was very unsure of the ride, but she really wanted to go on it. 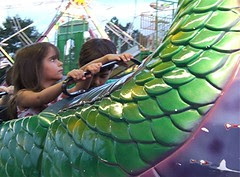 Rebecca&Nate
Originally uploaded by Teckelcar. It is a simple little ride that goes round and round and up and down. I shot a short movie of them on board. Max, much to Nate’s surprise, was on board too. He was a very brave boy and went all by himself further back on the ride.

About halfway through you can hear Jake commenting on how Max looks scared, but seems to be having fun at the same time.

Jake, as opposed to his brothers, is not a big fan of the rides. He prefers the carnie games, but he did go on a few of the big slides. At that point it was getting a bit dark and I didn’t get any decent shots of them going down the slides.

And we already know what Rebecca’s favorite ride is.

All of our kids had a grand time and it looks like we will be able to go again on Saturday.
Posted by Sarah at 11:58 PM