I feel somewhat obligated to post about our dogs today since I did a massive cat post earlier in the week and I don’t even have a cat. Mind you I do like cats and I even had a couple growing up, but we don’t have any now. Both my husband I are allergic to them. For me it is somewhat mild. As long as I thoroughly wash after touching them and avoid prolonged exposure I’m okay, unless it’s kittens. For some reason kittens cause my eyes to water and my sinuses fill after about 20 minutes in a room with them. Longhair, shorthaired it doesn’t matter. With adult cats I’m good for one to two hours and after a week of adjustment I can even share a house with them as long as they are not in my bedroom and wash up after petting them. However we won’t be getting cats because our dogs (at least Crunch) view cats as the other white meat.

Any way I digress, this is to be about our dogs.

Normally when I photograph our dogs they are in normal doggy poses.

John
Originally uploaded by Teckelcar. Here is John by the backdoor, lying in a patch of sunlight, keeping an eye out for potential fun and treats.

I’m not one to dress our dogs in goofy outfits. Well except for once. 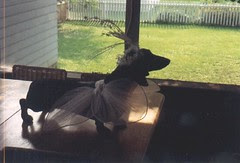 Fairy_princess
Originally uploaded by Teckelcar. This is Rally in her “Fairy Princess” costume. She won the grand prize at German Fest and was a huge hit with the crowd. I mostly did it because I knew I could. Rally just sits there with a long suffering patience and will tolerate all sorts of hats on her head. She is well trained and only knocks off the outfit after I give her the all clear. The red boys on the other hand are another story. John and Crunch promptly shake their heads when anything is placed on top.

As I was sitting at the computer John kept jumping up and placing his paws on my lap. I noticed my sunglasses and put them on him. For the briefest moment they stayed on. My camera was nearby and I was able to take a few shots before he left in disgust. This is what I got: 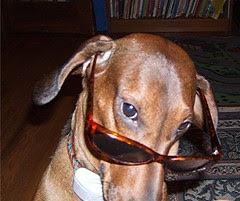 NICE pictures - your dogs are adorable! :)