Yesterday I took the kids to the 17th Street Farmers’ Market to pick up some yummy, super fresh tomatoes and afterwards met up with Larry for lunch. He got to pick the spot, since I’m not very familiar with what is around him and he has to get back to work. He decided we should shoot down Main Street to Careytown Burgers and Fries. It’s a neat little place that makes an excellent burger and has terrific onion rings. The rings are the real deal, batter dipped and deep fried to a lovely golden color and a satisfying crunch. I can’t stand onion rings that have been breaded and/or baked. Blech.

Lunch took a while, since we hit during the rush, but it was well worth the wait. The boys were well behaved, but Rebecca was another story. She was riding on the edge of a complete meltdown and nothing was right. She couldn’t decide on a drink until after we sat down on the patio outside.(You order at the counter and they bring it to you when it’s ready.) After a few minutes of sullen contemplation, with an occasional outburst, she decided that she wanted water. I went back in and got her water. Then we were treated to a squirmy disgruntled girl that would glare at you and say “Don’t look at me!” Larry, who was next to her, turned to me and asked if it was okay to look at me. With a big smile I said sure and we bumped foreheads. Once the food arrived Rebecca got over her snit and became a much pleasanter dinning companion.

We then whisked Larry back to work. When we were a block and half away I spied a parking space and pulled in. Larry, to put it mildly, was a bit surprised. I explained that I had been meaning to drop into the old Richmond City Hall with the kids. 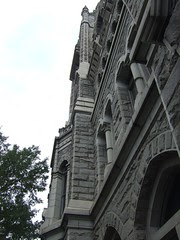 oldcityhall
Originally uploaded by Teckelcar. It is a beautiful old Gothic Revival building that I have mentioned before. It is right next to Larry’s building and I have wanted to photograph the interior. Visitors are limited to the first floor, but that is enough to get an idea of what it is like. So click on the doors the Old city hall and take a peek inside. 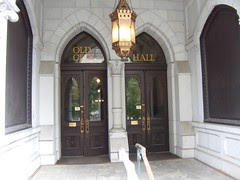 oldcityhallsidedoor
Originally uploaded by Teckelcar. The first time I entered the building I was stunned by the outrageous color scheme. I love the glass bricks on the floor of the central hall that are illuminated from below. Above is a skylight, but it was a gloomy sort of day so the interior was a bit dark.

I love all the details on the cornices and the columns. Even the elevators and the mailbox are special. This building is quite a contrast to the current City Hall, which is practically across the street. It is not the prettiest of buildings, but it does have an observation deck open to the public.

richmondcityhall
Originally uploaded by Teckelcar. I’ll have to haul my crew up there before the summer is over.
Posted by Sarah at 7:53 PM