So Sunday we gathered up the troops and went to the County Fair. It is something the kids look forward too all year long, so behooves us to go. Every time we go by the fair grounds Max and Rebecca announce that they want to go and every time they are sorely disappointed that it is not open. This happens fairly often, because I drive by it almost every time we stop by the school.

This year Larry was been organizing an outing at the fair with his co-workers and it turns out that everybody can go on Sept. 2nd, the last day of the fair. This could be a problem if the day turns out to be a wet one. During a light rain the fair is still tolerable, but during a torrential rainstorm I’m not willing to go. With Ernesto looming on the horizon, we went Sunday to make sure our crowd gets its annual fair fix.

We showed up around quarter to six and started off with grabbing some dinner. BBQ sandwiches for the grownups, pizza slices and hamburger for the kids. We get our BBQ from the Grange trailer. It is a local organization with friendly people and some very tasty BBQ. Then it was off to check out the old favorites.

Our first stop was the “Children’s tent.” The kids love riding around on the pedal cars and playing in the corn crib. Jake and Nate kept trying to organize races inside the tent. Here is a little movie of their efforts.

Max was a willing participant, but Rebecca was more interested in heading over to the petting zoo. We ducked over for a bit, but this year we weren’t allowed in with the animals. I don’t know if it was a liability issue or the fact that it was feeding time, but it was a bust as far as Rebecca was concerned. We like going in and petting all the animals. Long ago we learned that it was a nicer experience if you don’t have food. The animals don’t mob you; instead they just stand there with expressions of bored indifference.

Our next stop was the Barrel Train ride. A genuine farm tractor pulls a long line of barrel cars in a small loop in the fair grounds. It’s free ride for kids and is always very popular.

Max and Rebecca got to go around twice. Just as the tractor was pulling away Jake and Nate showed up and wanted to go as well, but it was too late and they had to wait.

This is a bit of what the ride is like.

After we pried them out of the barrels we headed on over to the agricultural tents. We admired the chickens in the 4H tent and we got to hold chicks in the neighboring tent. 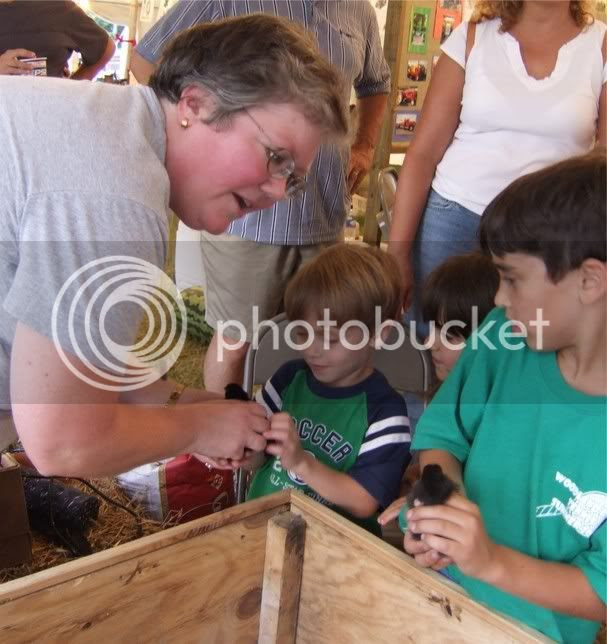 Nate and Jake did a fine job; in fact Jake was complimented on how well he held the chick. Rebecca couldn’t quite get the hang of it and quickly got frustrated by the whole thing and decided she would just watch her brothers. Max did hold the chick for a moment, but the chick quickly squirmed out of his grasp and hopped out of his hands.

Next up is the midway. I’ll save that for tomorrow.