What We Did for Summer Vacation, Grandma and Grandpa's

For the final third of our summer vacation we stopped at Grandma and Grandpa’s house.

We drove down Friday after we tidied up Nana’s and finished doing laundry, it is nigh on impossible to travel about for a week and a half and NOT do laundry. After a late dinner we all went to bed. Jake and Nate stayed with Grandma and Grandpa and the rest of us stayed at a nearby hotel.

The condo is a bit cramped for all of us and Grandpa has been feeling a bit under the weather. Max and Rebecca were a bit miffed, but the quickly got over it when they realized they got to stay in a hotel. Oh Joy! A hotel room! Rally, of course, was unimpressed. She is a veteran of many hotel stays and is unfazed by such things as elevators. (Elevators must be truly bizarre to dogs. You take them into a small and often smelly room, there is a muted sensation of movement and when the doors open they are somewhere else.)

On Saturday we didn’t do much. Grandma and I took the hoard out shopping and then we stopped at Friendly’s for snack time. On Sunday Larry took Jake and Nate to a
Mets’ game down at Shea stadium and the rest of us went to the aquarium in Norwalk.

Originally the game was to be at around 1:00 pm, however the Mets had attracted ESPN’s notice and the game was rescheduled for 8:05 pm to accommodate the broadcast schedule. Ugh! He had chosen that game expressly because it was a day game. Now it would be starting later than a regular night game. Oh well, all three did have a very good time and Larry was in bed by 12:30 am.

The aquarium is the same one we went to last summer and over Hanukkah. Much to the delight of Max and Rebecca they still had the robotic dinosaur exhibit from last time. I was able to get a nice picture of Max at the touch tank (with Rebecca in the background.) 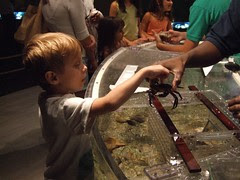 touchtank
Originally uploaded by Teckelcar. Again we showed up an hour and a half before closing and the place was fairly empty.

I also got these cool pictures of jellyfish.

jellyfish
Originally uploaded by Teckelcar. I read somewhere that it is possible to photograph fish tanks if you place the lens directly against the tank. 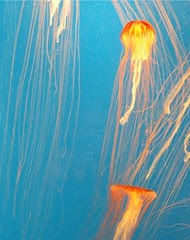 jellyfish2
Originally uploaded by Teckelcar. It helps to minimize the glare from the flash and it seemed to work.

The high point of the trip, at least for Max, was the sea turtles. One of the turtles was in a particularly social mood and I was able to snag a couple of very good pictures with Max and Rebecca.

seaturtle&twins
Originally uploaded by Teckelcar. In this case, as with the touch tank, I used the natural light function of the camera. That way I bypassed the whole glare problem with the flash.

If we lived any closer to my in-laws I think we would have to become members of the Maritime center. Max so loves the sea turtles.